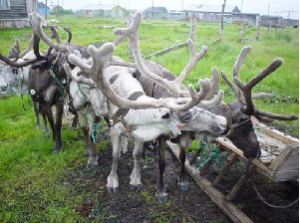 Tundra Nenets is a Uralic language spoken by about 25,000 people in north-western Siberia and the Arctic part of European Russia. There are two varieties of Nenets; Tundra and Forest. Forest Nenets is distinct from Tundra Nenets.

The territory of Tundra Nenets is bounded by the Arctic Ocean in the North, the Kanin Peninsula in the West, and the Yenisei Bay and delta in the East, with the edges of the speech area bounded roughly by the tree line in the south. Tundra Nenets dialects show little variation. The Eastern, Central and Western varieties of Tundra Nenets are mutually comprehensible, despite the large distances between Siberian communities. This is due to only recent occupation of new territories, and the mobility of the nomadic lifestyle that is still part of everyday life for some groups. Komi and Northern Khanty have had the most contact with Tundra Nenets, although now Russian has surpassed their contact with the language.

While continuously expanding in the east, the Tundra Nenets area has lately been receding on the European side. Not only is the Russian presence most influential there, but a number of Izhma Komi have also immigrated to Nenets areas, leading many communities to shift to the use of Komi. Because of nuclear experiments since the 1950s, the inhabitants of the Novaya Zemlya were resettled in urban settlements on the continent, which effectively led to the loss of native language command among the Nenets from that area. The net result is that while some of the local dialects in the vicinity of Komi areas have already become extinct, many if not all forms of European Nenets must be regarded as moribund.

The survival forecast on the Siberian side is much brighter. In the Ob’ area, the relative vigour of the aboriginal Tundra Nenets and Northern Khanty communities together with the diversity of Komi, Russian and Tatar immigrant groups have traditionally favoured wide-spread multilingualism rather than the domination of a single language. In the more eastern areas, it is Tundra Nenets that has functioned as a lingua franca, gradually replacing other vernaculars. During the Soviet era, however, the effective Russification policies and the massive influx of Russian-speaking colonizers almost eliminated both the multilingual tradition and the interethnic use of Tundra Nenets, leaving the home and the traditional economy based on nomadic reindeer breeding for the native language. The deliberate alienation of children from their native language and culture through the Soviet schooling system is, of course, felt deeply also among the Siberian Nenets, so that not even Nenets homes have avoided Russification. Nevertheless, the traditional Nenets way of life is still a competitive alternative to the adoption of Russian habits and, eventually, the Russian language, and many younger Nenets seem to be devoted to the maintenance of their national culture, and the Nenets language as its expression.

Despite many positive indications, even the Siberian Tundra Nenets community is still very much threatened, and only a wide-scale national awakening, leading to a real ethnic autonomy with a strict control of the native territory, may secure the long-term existence of the Tundra Nenets people and their language.

For Tapani Salminen’s grammatical sketch, which includes the most detailed description of the syntax, morphology and phonology of the language available so far in English, plus more background information about Tundra Nenets, see http://www.helsinki.fi/~tasalmin/tn.html. This site includes other texts, as well as links to further information about the language, which may be of interest to researchers.

The collection includes audio recordings as well as XML transcripts time-coded using the program SoundIndex http://michel.jacobson.free.fr/soundIndex/index.html). Glosses and transcriptions are provided for Nenets content, while Russian content is unglossed and translations have been placed in brackets in the transcription line.

The recordings are of mostly elderly speakers talking about their own personal history, including aspects of traditional herding lifestyle, plus a number of folktales and entertaining stories.

Research on Tundra Nenets was funded by an ELDP grant awarded to Tapani Salminen in 2003 and a grant from the Academy of Finland awarded to Larisa Leisio in 2009, project number 125225. Materials were recorded by Irina Nikolaeva and transcribed and analyzed by Tapani Salminen.

These materials are also available at the website http://larkpie.net/siberianlanguages/, which includes additional material in Kolyma Yukaghir, Northern Khanty, and Udihe.