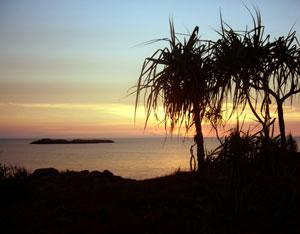 The data comes from a fieldtrip which was focussed on checking dictionary definitions of triangular kinship terms and on collecting names for flora and fauna and associated knowledge. The deposit also includes audio recordings of myths and stories about traditional customs, as well as video recordings made by Elizabeth Langslow as part of a community video project.

Mawng speakers living on Warruwi, Goulburn Island. More generally, Mawng speakers live in the Northern Territory, Australia. They own a coastal area of land between the areas owned by Iwaidja speakers and Kunbarlang speakers.

Mawng is the main language of daily communication at Martpalk (Goulburn Island) and an important language at Minjilang (Croker Island). There are estimated to be around 300 first language speakers of Mawng. Children learn Mawng naturally in the family environment. Young children often mix their languages freely but those who identify ethnically as Mawng tend to speak just Mawng from around ten years of age. A bilingual education program operated from 1979 until 1996. Mawng people generally name this as an important factor why Mawng is still being spoken by the younger generation, unlike the neighbouring languages Iwaidja and Kunbarlang, which were once of a comparable size to Mawng.
However, its status is still tenous. The importance of Mawng in the political sphere and the fact that Mawng speakers have their own settlement contribute to the language’s continued existence. Should the political situation change and Mawng speakers be forced to leave the isolated settlement at Martpalk, it is likely that children would shift to a larger language such as English or Kunwinjku.

Mawng is part of the Iwaidjan language family (Evans 2000). Mawng and Iwaidja are the only surviving Iwaidjan languages – the other Iwaidjan languages, Manangkarri, Marrgu, Wurrugu, Garig and Amurdak are no longer spoken. Mawng speakers are multilingual and all speak English. Most adults also speak Kunwinjku and many speak a Yolngu-matha dialect, Iwaidja, Kunbarlang or a Maningridan language. Mawng is considered a distinct language by its speakers. Earlier documentation refers to a number of different dialects and there are still a number of synonym sets for words used by different dialects. However, no work on dialectology has been carried out and it is not known to what extent dialect differences are still maintained.

Mawng is endangered but its position in the short term is good. For this reason, now is an ideal time to document the language further. The current generation of elders grew up using traditional food gathering methods and retain a large amount of vocabulary that is no longer used or being passed on to the younger generation. In particular, verbs used to describe activities associated with making string, nets and processing plant foods and names for plants and animals. The Mawng community mostly reside on South Goulburn Island which differs in its flora, fauna and geographical features from those found on mainland Mawng territory. Many terms for these features are no longer being acquired by children. In addition, most triangular kinship terms are no longer widely used. These must be documented in the next ten years before those who know them pass away. Now is the time for detailed documentation of Mawng as it is still used as an everyday language and it has not been greatly influenced by changes since European settlement.

Mawng speakers are keen to have their language documented in the form of a dictionary. Community members are working to increase the use of Mawng in the school curriculum. A practical orthography for Mawng was developed by the missionary linguist Mrs Heather Hewett. This system was used in the school’s bilingual program, at the church and the health clinic. Only Mawng speakers who did their primary schooling between 1979-1996 or worked at the school during that time are literate in Mawng. Mawng is currently used for writing notes and hymns by a subset of the community.

The Warruwi Community council has been very supportive of the the depsositor’s research on Mawng. Permission to carry out research at Martpalk was initially negotiated at a face-to-face meeting with council members at Martpalk in early 2002. The community granted the researcher/depositor permission to conduct research on Mawng on the condition that she develops the Mawng dictionary and eventually brings about its publication.

The data gathered in this fieldtrip will be used to expand the existing dictionary database. This will be published in a format accessible to Mawng speakers. In addition, a special book on Mawng ethnobotany may be published with the assistance of the Northern Territory herbarium.

A small amount of Iwaidja language was used in the recordings that make up this deposit.

In addition, acknowledgement must be made of who recorded, transcribed, translated and analysed the material (Ruth Singer and/or Nita Garidjalalug in most cases) and the speakers. Metadata for each file will need to be checked to find out who the relevant people to acknowledge are.