Documentation of the language and lifestyle of the Galesh 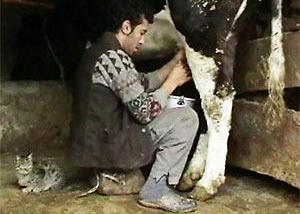 Landing page image for the collection “Documentation of the language and lifestyle of the Galesh”. Click on image to access collection.

The Galesh are herdsmen in the Alborz mountains. Their total number is unknown, but diminishing rapidly due to the modernisation of the Iranian society. The collection includes documentation collected as part of a project investigating if the language of the Eastern Galesh in Golestan is similar to any of the languages of the settled population in the area or if it should be regarded as a language of its own. In Galeshi there are many terms for husbandry and dairy production, which are not found among the agriculturalists. Since the lifestyle of the Galesh is severely threatened this project will document important aspects of it before it is too late.

The Galesh cow-herding community in the Ziarat valley, Golestan, Iran

There is a group called the Galesh in the Alborz mountains of the northern provinces, Gilan, Mazandaran, and Golestan, Iran, whose language and culture is severely endangered due to modernisation of the local economy and lifestyle. The Galesh are herdsmen, who previously lived a semi-nomadic gender segregated life. The wives and children settled in the nearest village, and only the men went to the their workplace or in search of new seasonal pastures for their cows. The dialect spoken by the Galesh in Ziarat, which can be described as a variant of Mazandarani, is under heavy influence from Persian. Persian influence can be observed at all levels of morphosyntax as well as in the vocabulary. However, Ziarati still retains its Mazandarani identity, which can be observed particularly in the verb system.

The collection contains a set of interviews with people whose lifestyle has undergone drastic changes in the past 50 years, from a cooperative system of cow herding to individual possession of a few cows or total abandoning of the traditional lifestyle. This change is well described by five people who have experienced it themselves. There is also a professional film, which shows traditional methods of dairy production as well as daily life in Ziarat, religious ceremonies, cooking, weaving etc. and many photos.

Outputs of the documentation project include the following monograph which includes five life stories from a Galesh community in the village of Ziarat, situated in the Province of Golestan, east of the Caspian Sea in Iran.

The texts are presented in phonemic transcription with English and Persian translations and a grammatical sketch. The three appendices consist of one text in phonetic transcription, a glossary, and notes on the photos and film found on the CD accompanying the book. The sound files of the five texts are also included on the CD.