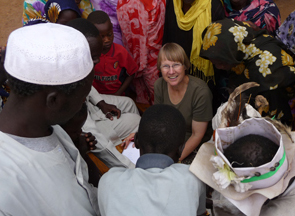 This deposit consists of Uncunwee language data gathered in the Nuba Mountains of Sudan and among the Uncu refugee community in Cairo, Egypt. The deposit includes lexical, grammatical, narrative, conversation, demonstration, song, dance, and general information data in a variety of file formats. A small percentage of the data is fully analysed.

The collection was put together with contributions from the Uncu community of South Kordofan, and the Sudan and Uncu community among the refugee population of Cairo, Egypt. TheCairo-based Uncu speech community members, led by our Uncunwee-speaking team member, were involved in all facets of the project from the beginning, including assisting in project planning and in providing, gathering, transcribing, translating, and analyzing data. The same model of community involvement was later used in Khartoum.

All Uncu speech communities with which we have worked have made it clear to us that they welcome our work and our help in assisting them in the areas of language maintenance and language awareness/teaching. We have seen it as our ethical responsibility to participate fully in the Uncu community’s various efforts at language maintenance. To this end, we have work hard in the area of capacity building, holding field schools in rudimentary linguistic description and the structure of Uncunwee, a dictionary-making workshop, and have also worked with the community in orthography development. We have made every effort to make the data that we have collected available to maintenance and language teaching development.

Community members were acknowledged in all publications for which they contributed data if they wished. However, many who are refugees asked to remain anonymous, and their requests was respected in all cases.

Uncunwee (ISO 639-3:ghl) is referred to as Ghulfan by the Ethnologue and other academic sources. Ghulfan is an Arabic exonym for the Uncunwee-speaking people, who call themselves Wunci, refer to their dialect as Wuncu and refer to the language to which it belongs as Ajang. Most Uncunwee speakers consider the term Ghulfan to be pejorative and prefer that the term Uncunwee be used as the name for their language.

Uncunwee is a member of the Kordofan Nubian dialect group. Kordofan Nubian is not to be confused with Kordofanian, a primary branch of the Niger-Congo-Kordofanian phylum (Williamson 1989). Uncunwee shares a large lexical base with other languages from the Kordofan (Hill) Nubian dialect group and is mutually intelligible with the other members of this dialect group, at least for older speakers. There is general agreement that Uncunwee is an Eastern Sudanic language, more specifically a Nubian language. Eastern Sudanic is assigned by Greenberg (1971 and elsewhere) to Nilo-Saharan, although this higher-level grouping is controversial. There is, however, some disagreement as to classification of Kordofan Nubian within Nubian. The first classification of Uncunwee as a Nubian language is found in Lepsius’ Nubische Grammatik of 1880. Rilly (2003: 264) classifies the Kordofan Nubian cluster in relation to other Nubian languages while Jakobi (personal communication, August 26, 2006) places Uncunwee in the eastern branch of the cluster along with Kudur, Dilling, Dair, Kururu, Kadaru, Dabatna, and Debri.

Uncunwee is spoken in the Nuba Mountains, an ethno-linguistically heterogeneous region in the centre of Sudan. The Uncu people mostly live as farmers in small villages to the south of Dilling, the second largest town in the Sudanese state of South Kordofan. There are also intact Uncunwee speech communities in Cairo, Egypt, and Washington, D.C. Though there are no estimates of the number of Uncunwee speakers more current than Stevenson’s 1984 figure of 16,000, it is likely that the number of speakers is far lower today. Bender (2005: 2) estimates there to be 25,000 speakers of the entire Kordofan Nubian dialect cluster.

Uncunwee is endangered due to two main factors: the long-standing Sudanese government policy of Arabization and a history of migration from the Uncu area because of conflict and lack of economic opportunities.

First, due to heavy pressure from Arabic, the lingua franca and only official language in Sudan, the indigenous languages, which have low status and lack official support, are severely threatened by extinction (Mugaddam & Dimmendaal 2006). In the ethnolinguistically highly heterogeneous Nuba Mountains there are several factors that work to spread the use of Arabic at the expense of Uncunwee and other indigenous languages. Perhaps the two most powerful causes of this shift are the high percentage of ethnically and linguistically mixed marriages and the high degree of labour and forced migration to cities such as Khartoum and Cairo, where in the ethnically mixed urban environment, Arabic is the preferred language of communication. The language shift from Uncunwee to Arabic is attested both by the high percentage of children whose first language is Arabic rather than Uncunwee and by the dwindling number of monolingual Uncunwee speakers (Patriarchi & Rottland 1995).

Moreover, the unstable political situation in the Nuba Mountains and the resulting forced migration of many Uncunwee speakers may have had a negative impact on Uncunwee birth rates and has almost certainly contributed to increasing patterns of exogamy among Sudanese immigrants.

Though there are still many elderly and middle-aged people who speak Uncunwee fluently, we have noticed a trend in even the remotest Uncu villages of young mothers raising their children as monolingual Arabic speakers. Given this and other previously mentioned conditions, Uncunwee is clearly in serious danger of becoming moribund, where no Uncu children will be native speakers of the language, and of moving into the end stage of language obsolescence.

Uncunwee has not historically been a written language and is not generally written by its speakers today, though some speakers, including one involved in this project, are now attempting to establish an orthography for the language.

As far as we know, there are no adequate modern grammatical studies of any Kordofan Nubian dialect. There are, however, two early studies of Uncunwee. Junker and Czermak (1913) present a grammatical sketch introducing some Uncunwee texts, and Czermak (1919) presents a detailed phonetic and tonetic description of Uncunwee, but does not describe how tone interacts with other grammatical areas. There is also some published and unpublished work on other Kordofan Nubian languages. Kauczor (1920) produced a grammar of Dilling, though without addressing the issue of tone. There are also two phonemic inventory sketches for Dilling and Kadaru (Bechhaus-Gerst 1984/85; Tucker & Bryan 1966), though these accounts differ analytically. Finally, Jakobi’s unpublished descriptive sketch of Tagle (2000), based on data collected in the Nuba Mountains, provides valuable comparative information for a language closely related to Uncunwee.

When completed, this collection will contain

The documentation of Uncunwee is important from a typological and areal perspective, since at the time of documentation there had been little modern documentation heretofore of Kordofan Nubian languages, especially of their tone and ATR systems. Therefore, this work provides a valuable contribution to language typology and to a growing body of documentation on languages of the Nuba Mountains.

Before the start of the work for this collection, we had been working with six members of the Ghulfan community in Cairo, the primary site of the project, for over two years.

The materials for this collection were gathered and prepared between June 2008 and November 2008 in Sudan and Egypt as part of an ELDP-funded Major Documentation Project awarded to Robert Williams.

During the project, we conducted fieldwork in Sudan and Egypt and trained Abdulbagi Daida, our Cairo-based colleague, in basic computer skills and in the use of ELAN to transcribe and translate the data we have gathered. In addition, we have carried out capacity-building and language maintenance activities in Sudan and Cairo.

Two team members, doctoral student Jade Comfort and translator/consultant Abdulbagi Daida, devoted most of their time to the foundational descriptive work. Principal Investigator Robert Williams worked on foundational descriptive work, project administration, the dictionary, and archival preparation. Angelika Jakobi provided invaluable fieldwork, including the recording of a large amount of culture-specific vocabulary and the gathering and analysis of Uncu proverbs.

In addition to archiving at ELAR, the materials will be deposited with the American University in Cairo (AUC) library and the LELA archives at the Max Planck Institute for Evolutionary Anthropology (MPI EVA).

This material is used by permission of the Uncunwee Documentation Project.