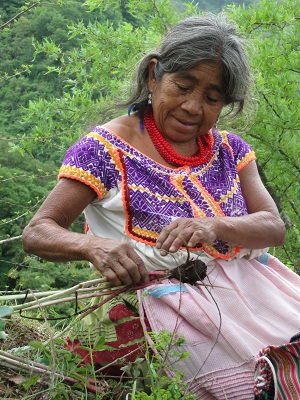 A collection of audio- and video- recordings of narratives, interviews, conversations, oratory, ritual speech, linguistic elicitations, and other genres in all major varieties of Chatino. The collection also includes transcriptions, translations, and annotations of some of the recorded texts; data sets, word lists, and analyses; academic papers and pedagogical materials.

Chatino cultural group. Chatino is a group of language varieties forming an independent genetic unit within Zapotecan. Chatino is spoken by most of the 29,000 Chatinos of Oaxaca, Mexico’s, Sierra Madre, the mountains between the valley of Oaxaca and the south-facing Pacific coast. The highlands, reaching slightly more than 2000m, are cool and wet, especially during the summer and fall; while the lowlands are hot, humid, and lush. Juquila, in the highlands, is a predominantly mestizo town and is the governmental hub for the entire region. Together with Nopala, in the lowlands, it is also a commercial and transportation center. Puerto Escondido, on the coast, is outside the Chatino region proper, but attracts many Chatinos as workers in its tourist industry.

Despite its internal diversity, speakers normally call all varieties ‘Chatino’, making it possible to say about a speaker of another variety, ‘I can’t understand her Chatino.’ That is, language identity is projected from a common Chatino ethnic identity, rather than from any reckoning of mutual intelligibility among the various Chatino varieties.