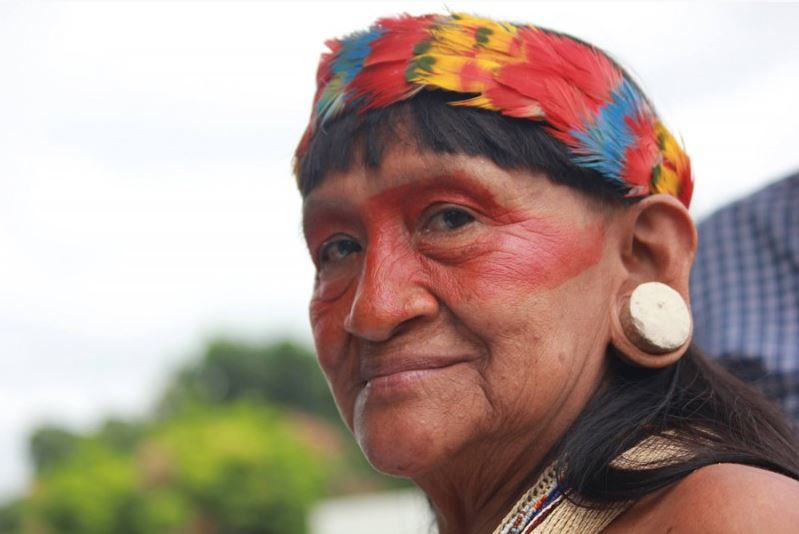 Video recordings of the language and culture of the Waorani. Wao Terero is an under-documented and as yet unclassified language spoken by some 3,000 people in the Ecuadorian Amazon. The collection covers a wide-range of Wao discourse contexts and contains transcriptions and translations into Spanish and English.

The Waorani are an indigenous people of Amazonian Ecuador who live on a legally recognized territorial reserve of more than one million acres between the Napo and Curaray rivers (approx. latitude 1° 1’10.43″S, longitude 76° 3’29.94″W), where their subsistence economy is based primarily on hunting, gathering and gardening. While most reside in relatively permanent settlements with airstrips and state-run schools, their long treks in the forest, residential movements between villages, and temporary migration for employment with oil companies operating within the reserve all lead to a mobile way of life. There are at present some 3,000 Waorani people living in more than 30 villages. Waorani social organization is based primarily on household and extended family ties.

All Waorani speak their native language, Wao-terero (ISO 639/3), a little-studied language that has yet to be classified among other indigenous languages of South America (Klein and Stark 1985, Campbell 1997). However, the emergence of state-run schools where only Spanish is spoken, combined with increased urban migration, the growing degree of intermarriage between Waorani and other groups, particularly the Quichua, and the incursion of oil companies and others into Waorani territory threatens the sustainability of Waorani and clearly places Waorani in the endangered category.

While there are few reliable historical records on the Waorani, they have for many years held a prominent place in the popular imagination of Ecuador and beyond, particularly for their contact with missionaries in the twentieth century. In many contemporary contexts, Waorani language and culture are marginalised in the face of the changing and intensifying inter-ethnic relations in Ecuador.

There is very little linguistic documentation on Wao Terero. The alphabet originally introduced by missionaries has very limited use today in Waorani communities, and no in-depth linguistic research had been carried out in the area for at least 20 years before this project.

Some of the more notable characteristics of Wao Terero is the limited number of consonants and the extensive vowel inventory which contrasts oral vs. nasal vs. glottalized vowels. It has complicated and still poorly understood nominal and verbal classifier systems. Person marking on the verb includes contrasts between first, second and third person subjects and number distinctions of singular, dual and plural. However the person markers are not always obligatory and some occur in complementary distribution with classifiers. Wao Terero is striking in its extensive inventory and use of ideophones and an interesting complex predicate system.

There is considerable Waorani interest in documenting the language, both within the communities and in the political organisation. One of the primary local concerns is that the very survival of Wao Terero is threatened by the exclusive use of Spanish in formal education, increasing urban migration, and the current trend of inter-ethnic marriage between Waorani and Kichwa speakers.

There is strong community support for collaborative documentation projects. Elders want to see their indigenous language acquire a greater cultural value within their communities, while young people have expressed their interest in both acquiring a new skill in language documentation and an opportunity to engage more directly with the knowledge and stories of elders through transcribing and translating texts.

The current collection includes 72 hours of Wao video recordings from over 150 Wao speakers. All recordings are in Wao Terero and the majority are transcribed and translated into Spanish. In addition, some 17 hours also have an English translation. All, except three of the interviews are carried out by Wao speakers.

We strive to record naturalistic discourse, so it is not always easy to classify the material—a personal narrative might devolve into a traditional story, a song or daily conversation. We have for the most part not cut the videos into smaller segments. This is fairly natural conversation so the themes often wander a bit and then return to a previous topic. Cutting up the videos can really interfere with a clear understanding of what is being talked about. However, we can roughly divide the material into categories covering a wide range of discourse contexts and subject matter including: over 24 hours of narrations concerning personal as well as Wao history; 23 hours of social and political reunions; 13 hours of daily conversation; some 6 ½ hours concerning cultural practices such as hunting; almost 5 hours of traditional stories; one and a half hours concerning religion; and a very small amount of elicited data (17 minutes).

The project is collaborative—speakers are trained in the use of the cameras and computer programs and they choose the majority of the themes and discourse contexts that are recorded. In essence, the content of the deposit is a reflection of Wao interests and culture. As noted by Rival (2002; 2016) and High (2015) the Waorani are keenly interested in “dorani” (ancestors). Which explains the large number of historical texts covering events of the last 100-150 years. The historical narratives begin with the arrival of the rubber prospectors who attacked and kidnapped Waorani, to the invasion of their territory by the “kowore” (colonists and other outsiders) and the resulting conflicts. More recently, from the 1950’s to the present, the recordings address the arrival of the evangelical missionaries, the oil companies, conflicts with the outsiders as well as the “uncontacted” Wao groups and recent inter-group conflicts. This material is interesting in that it presents Wao eye-witness accounts and perspectives on first contact with outside peoples and the resulting attempts to adjust to the dominant culture.

The second largest context concerns political and social reunions. Again, this is somewhat hard to classify because Wao reunions often mix social events such as dancing and singing, or a traditional wedding with political discourse. The Waorani are very interested in recording these events for several reasons. One of the most pertinent is that many Waorani do not read or write, they have no media outlets and by video-recording the political sessions all Waorani can see and hear what transpired and can hold both Wao and ‘kowore’ leaders accountable. Many Wao are actively involved in an intense struggle to protect their territory from oil exploitation and invasion by colonists as well as maintaining their way of life and culture. The collection provides invaluable insights into these issues as well as demonstrating the Waorani’s distinct public discourse style.

The daily conversations record normal Wao life and also include a fair amount of adult/child interaction.

The traditional stories, while interesting in their own right, also contain the largest number of ideophones.

We have more material and we will continue to add to the collection.

Since much of this material is politically sensitive, personal or recounts events that many might find disturbing, we cannot release it to the general public. But we strongly encourage serious researchers to contact us for access. Please tell us who you are, what material you want and why you want it. We would really like to see this material used. We do expect to release several more hours for access by registered ELAR users—mainly the traditional stories and the texts concerning cultural practices. We are waiting for Wao approval.

The materials are also archived at ERL, the MPI satellite server located at FLACSO in Ecuador and at the headquarters of the Waorani women’s organization AMWAE in Puyo, Ecuador. The Waorani community has copies of all the material and can adapt it for use in bilingual schools and for the community at large.

The Waorani government organization NAWE (Organisation of Waorani Nationalities of the Ecuadorian Amazon), authorized the project. We also have good Ecuadorian support through FLACSO, a post-graduate social research institution.