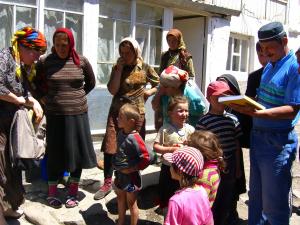 Deposit page image for the collection “Dictionary of Archi: Archi-Russian-English with audio files and cultural materials”. Click on image to access collection.

Archi is spoken in one large village, Archib, and several nearby farms in the mountainous area of Southern Daghestan (Caucasus). Geographically, its neighbouring languages are Avar (Avar-Andi group) and Lak (Lak-Dargwa group). The degree to which the language is still being passed successfully to younger generations is unclear. On the one hand, it is the main language of everyday life. On the other hand, there is a marked tendency for younger people to leave the village, where we must assume that they typically lose the language, since it is not spoken anywhere outside Archib.

Speakers view Archi as a source of pride: “the most complex language in Daghestan”. They are very conscious of the exclusiveness of their language and of their way of life. They have some justification: the phonology and morphology of Archi are indeed highly complex, the location of Archib is remote (the village is at an altitude of 2000 m and is surrounded by mountains on three sides) and Archi has so far confounded the historical linguists, who have not been able to establish fully its genetic position. It has similarities with both Lezgian languages such as Lezgian and Tsakhur and Avar-Andi languages such as Avar and Bagwalal. Archi is traditionally treated as Lezgian, but there are sufficient problematic features to lead some specialists to challenge this affiliation. Lexicographical work would clarify the issue, particularly given that an important focus will be to record words denoting traditional cultural objects, some of which trace back sufficiently far to help establish the appropriate branch to which Archi should be assigned. (This is not the primary focus of the research, but it is a valuable side-effect).

Archi is remarkable even within Daghestan; the data made available by Kibrik and Kodzasov are frequently cited in various linguistic works (see, for example, the inclusion of Archi as an exemplar language in Spencer and Zwicky’s Handbook of Morphology 1998 and the numerous references in Corbett’s Gender, 1991). Archi has a rich phonological inventory, having 81 phonemes, mainly consonantal. It is equally remarkable for its morphological system, with extremely large paradigms and with irregular patterns of stems. This complexity helps determine the researchers’ approach: language preservation requires that the speakers, especially those of the younger generation, should have a dictionary (with an accessible explanation of how large numbers of forms are derived from few stems).

Archi is a highly endangered language. 859 speakers were registered in 1975 and the general demographic situation suggests continuing decline since that date. The last substantial new work on Archi was published in 1979.

While there is reasonable information on morphology and syntax, there is much less available on lexical material. Hence, this project aims to produce dictionaries to meet the needs of speakers and the interests of linguists.

The team has been assembled so as to take advantage of the extensive experience of Kibrik and Kodzasov, who have worked on Daghestanian languages for more than thirty years. The fieldwork (including photography) and detailed work on dictionary entries was the responsibility of Chumakina, who has experience of fieldwork in Daghestan and elsewhere. We have an experienced consultant, Samedov, who has a long association with Kibrik and Kodzasov, as our first point of contact with the community. The principal investigator has extensive experience in typological work, and of seeing research projects through to a successful conclusion. The researchers have a record of successful collaboration, including of working together in Daghestan. The project was located in the Surrey Morphology Group, a helpful and supportive environment for work of this type.

Archi is not used as a written language. Previous grammatical descriptions (Kibrik et al., 1977) used a special, rather complex transcription that was partly dictated by the technical (publishing) limitations of the time. In view of its complexity this transcription does not lend itself well to literacy goals. The dictionary will use a more modern transcription, as used in most contemporary work on Daghestanian languages.

The full version of the online dictionary is available from the University of Surrey at http://www.smg.surrey.ac.uk/archi-dictionary/.