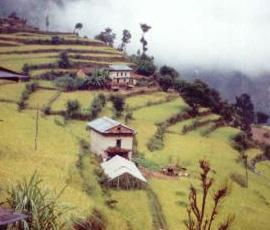 Deposit page image for the collection “Surel narrations about everyday life and village history”. Click on image to access collection.

This deposit contains audio and associated transcriptions about the everyday life of villagers from Suri (District of Dolakha, Nepal). It includes historically and anthropologically interesting information about work, food and clothing in a Nepalese village 50 years ago.

Transcriptions are in ELAN format. The following abbreviations are used as labels of ELAN tiers:

Surel is a hitherto undescribed, and with less than 30 active speakers, threatened Tibeto-
Burman language of Nepal. Surel is spoken in the village of Surī (Ward number 7) on
the southern bank of the Surī river in the Dolakhā district. Neighbouring languages are
Nepal’s official language, Indo-Iranian Nepali, and the Tibeto-Burman languages Newar,
Tamang and Thangmi. A finding of D. Borchers’ field work in Surī in spring 2008 was the
confirmation that Surel displays many similarities with Sunwar, a Tibeto-Burman language
spoken in villages situated about 40 kilometres south of Surī.

The Surel community has roughly 200 members of whom about 25 persons use the Surel
language in their daily communication with family and friends. All active speakers of Surel
are aged 40 years or over and bilingual with Nepali. Several persons aged between 20
to 40 years understand Surel but never speak this language. The women speaking Surel
are illiterate, whereas most male speakers are able to read and write Nepali, written in
Devanāgarī. Surel, as a rule, is not written but literate speakers have no problem in writing
in their mother tongue. Surel speakers use their language with any family members and
friends who understand the language. Those who only have a passive competence of
Surel take part in the conversation by speaking Nepali.

Traditionally, the Surel are farmers but as most Surel do not own enough land for
subsistance the men seek jobs outside of the village.