Documentation of the South Eastern Huastec 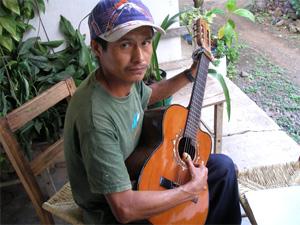 Landing page image for the collection “Documentation of the South Eastern Huastec”. Click on image to access collection.

This collection documents South Eastern Huastec, as spoken by the Teenek (Huastecs) of the village of San Francisco in Veracruz, Mexico.

The image shows Narciso de la Cruz Domínguez, one of the consultants for this project.

The language is known as South Eastern Huastec, Huastec of San Francisco, and Teenek of San Francisco.Huastec, or as they call themselves, Teenek, are an indigenous people of Mexico historically based in the states of Hidalgo, San Luis Potosi and Veracruz, and concentrated along the route of the Panuco River and along the coast of the gulf of Mexico. This area is called la Huasteca. The Huastecs have lived here for a couple of thousands of years, since the split from the rest of the Maya (Kaufman 1990,Robertson&Houston 2003).Besides in the village of San Francisco, South Eastern Huastec (HSF) is spoken in some other villages of the same municipality like Las Cruces, Arranca Estacas, Ensinal, or in neighbouring municipalities of Chinampa, Amatlan, and Tamiahua. Other neighbouring villages in the area are Nahuatl.HSF is a Mayan language and together with other two varieties, Huastec of San Luis Potosi (HVA), and Huastec of Veracruz (HUS), and the extinct Chicomuceltec (COB), belongs to the Huastec branch of the Mayan family. There are 103,788 speakers of the Huastecan languages (1990 census). is spoken by about 1,700 people in the village of San Francisco Chontla.

The collection contains a large number of audio files, along with transcriptions and some video files. The audio files contain elicitation sessions, stories and conversations. There is a dictionary, pictures portraying the consultants who participated in the documentation project, and another substantial portion of the materials are for language teaching and community use.

In a number of texts traditions and cultural events are described, such as the preparation of ground coffee, or the process of building a traditional house.