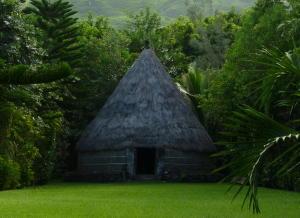 This project has documented Caac (ISO 639-3 msq), a Southern Oceanic language spoken by the Mwelebeng people (1050 speakers in 2003) in the region of Hoot ma Waap, northern New Caledonia.

The corpus of audio data is transcribed, annotated and translated with an emphasis on spatial expression in Caac. This project will also include a revised version of the dictionary compiled by Hollyman & Mwêau (1967) and produce pedagogical material in line with recent national and regional policies.

Speakers are traditionally bilingual or multilingual as they can understand the language of neighbouring groups and French, the official language. While French is the most frequently used language in the media, education, politics and as a means of communication between different ethnical communities, vernacular languages are spoken within the community and at home. Language contact can be observed between French and Polynesian languages affecting some parts of the lexicon of the Kanak languages.

Caac is also called ‘the language of Pweevo’, ‘the language of the Mwalebeng people’. The field linguist Jim Hollyman, who started to document Caac in the 1960s, referred the language as “Caaàc”, distinguishing two syllables as he considered this spelling closer to the phonetic transcription.