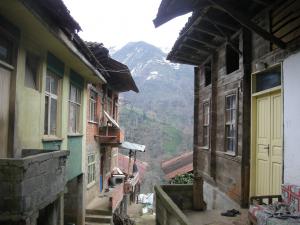 Laz (ISO-639: lzz) is a highly endangered South Caucasian language mainly spoken in North-East Turkey (+41° 19′ 12.39″, +41° 15′ 37.90″). The collection contains 230 hours of audio and HD video recordings in the four dialects of Laz, gathered over a period of 11 months in 2011 from more than 360 speakers. It also includes 560 photographs taken during the recording sessions and some transcriptions. Various genres are documented.

Laz is spoken in North-East Turkey and in two villages in South-West Georgia. The Laz speaking area in Turkey – also known as Lazistan – consists of five small towns situated on the coast of the Black Sea and surrounding villages located in the mountains. The humid subtropical climate is favorable for tea growing, the main economic activity of the area.

The Laz from Turkey have been Muslims since the end of the sixteenth century. The Laz living in Georgia are Muslims and Christians.

The Laz preserve cultural peculiarities in food, garments, dances, songs, beliefs in supernatural entities, events relating to the life cycle, architecture and technical skills, in addition to the language itself. Laz folklore is, however, greatly threatened by the pervasive influence of Turkish language and culture.

Laz belongs to the South Caucasian (Kartvelian) language family. It is divided into four main dialectal areas. It is mainly spoken in the mountainous region of North-East Turkey in the towns of Pazar, Ardeşen, Fındıklı, Arhavi and Hopa, which are located on the Black Sea coast, as well as in the neighboring villages. There are four dialects in these villages, with subdialectal variation across villages (and sometimes across families within villages). The differences between the dialects concern all linguistic levels: phonology, morphology, syntax and the lexicon. The Laz-speaking area also extends over two villages in South-West Georgia.

During the second half of the 19th century, many Laz moved to a region in Western Turkey, to the East of Istanbul. They retain dialectal peculiarities which are not attested anymore in the original Laz speaking area.

All speakers are bilingual with either Turkish or Georgian. Laz is used almost exclusively among family members. It is not written. Estimates of the number of speakers vary between 33,000 and 250,000. In Turkey, young people do not speak Laz, even though many understand it; Turkish is the language of education, administration and the media.

Many Laz do not seem concerned that their language and culture are endangered, and not being passed to younger generations. However, there is a “Laz movement”: these are Laz from Turkey who are concerned about the endangerment of their language and who are trying to document and disseminate it.

Laz has a range of grammatical peculiarities which are of interest for linguistic typology:

– A highly developed system of valency changing devices (applicative, middle, passive and antipassive, potential and deagentive, and causative). The deagentive derivation indicates that the participant encoded as the (non-canonical) subject did not perform the action deliberately – that the action was carried out without his control. The voice mechanisms can combine to yield, for instance, middle-applicative and causative-applicative verbs.

– Several constructions with non-canonical, dative subjects. These constructions are found with the potential and the deagentive derivations and with a range of verbs involving an experiencer or a possessor.

– An opposition between evidential and non-evidential tenses.

– A morphologically intricate system of cross-referencing affixes, which is sensitive to the person hierarchy 1>2>3.

– Relative clauses of a typologically uncommon type and not attested in the other languages of the area. The main strategy in Laz involves prenominal relative clauses with a finite verb and a subordinating clitic ‘na’ which appears inside the relative clause.

– A very rich system of spatial preverbs (33 in the Arhavi dialect).

This project builds on the researcher’s PhD work, which was a typologically oriented grammar of the dialect of Arhavi.

The recordings in this deposit are also deposited on CDs in the Laz Cultural Association (Laz Kültür DerneUi) in Istanbul (http://www.lazkulturdernegi.org.tr/kultur/), making it available to the community.

This project could not have been completed without the help of a great many people, among whom are İrfan Çağatay, Ali Gümüş and Murat Ercan.

Users of any part of the collection should acknowledge René Lacroix as the principal researcher. Users should also acknowledge the Endangered Languages Documentation Programme as the funder of the project. Individual speakers whose words and/or images are used should be acknowledged by name. Any other contributor who has collected, transcribed or translated the data or was involved in any other way should be acknowledged by name. All information on contributors is available in the metadata.