Linguistic and cultural documentation of Sadu 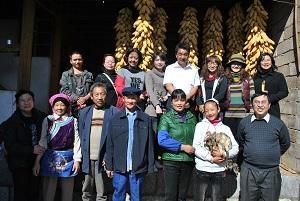 Landing page image for the collection “Linguistic and cultural documentation of Sadu”. Click on image to access collection.

The total population in Chunhe Township Administrative jurisdiction is 55,368. Of them 5,310 are Yi; 996 are the Sadu, officially Bai.

It was identified as a newly-discovered language which belongs to one of Yi branch languages of Tibeto-Burman language family of Sino-Tibetan Language Phylum, which parallels with the Hani, Yi, Lisu, Jinuo and Lahu language etc.

There is almost no literature on the Sadu ethnic group. The historical background we acquired was mainly from oral narration delivered by the elders in the three hamlets. According to limited local Chinese records and some elders’ oral narrations, it was said that the Li clan in Jiaoyuan and the Bi clan in Dashuitang hamlet moved from Hetaoyuan Township in Kunyan County and Baofeng Township of Jinning County during the time of the Qing Dynasty. Originally they belonged to a sub-branch of Yi who claimed to be “Samodu”, whose ancestors were referred to “Ximodi” in the Tang Dynasty, and as “Ximotu” in the Yuan Dynasty. This group of people was named “Bailuoluo Samodu” after the Ming Dynasty. Nowadays, the villagers of the Li clan acknowledge that they are the descendants of Dali Bai nationality, however. They call themselves Sadu. Yet they use different names to distinguish themselves from one hamlet to another. The people from Xincun village call themselves Suonapo. The people from Tashuitang call themselves Tatapo; The people from Jiaoyuan claimed themselves Lilepo. They all were referred as Bai-Yi before 1958. They were designated by the Government as Bai nationality in 1958. Nevertheless, the language is very unique. It is neither intelligible to Yinyuan Bai, nor Dali Bai, nor local Yi. Sadly, we found that the descendants of preceding generations in Hetaoyuan and Baofeng Townships have now all shifted to Chinese. Therefore, this group of people was redefined as the Sadu.

According the identification, the Sadu language belongs to one of the languages of the Tibeto-Burman branch of the Sino-Tibetan language family. However, the Sadu language is a lesser-known language. It is not intelligible to Bai, nor the neighboring Yi. It is necessary to redefine the genetic affiliation explicitly based on core words, phonology, words formation and grammar analysis as well as comparison with related languages.