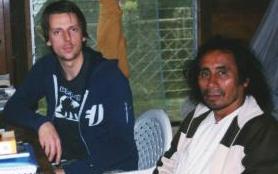 Lakandon Maya is an endangered and underdocumented language belonging to the Yukatekan branch of the Mayan language family. The Lakandones have been the subject of many publications devoted to their religious traditions and their forest dwelling way of life, but surprisingly little work has been done describing their language. This deposit is an extensive documentation of the linguistic practices of Lakandon speakers with a focus on the use of deictic time words/expressions and their meanings.

The Lakandones, numbering around 800, an indigenous group in south-eastern Chiapas of Mexico. The Lakandones only can be called a “community” when contrasted to other indigenous groups. There is almost no central control over community members and no individual or group of individuals has much influence over anyone else.

Part of the history of the group has been one of living in isolated hamlets throughout the more than 100.000-hectare area of rain forest with brief contacts between families for purposes of marriage and perhaps trade. Only in the last half-century or so, have Lakandon settlements allowed a comparison to a sedentary community in the form of a village because of easy access to roads, electricity and medical care.

The Lakandon community of Lacanjá Chan Sayab is also going through changes induced by their recent connection to other villages and towns by newly made roads. The last generation of speakers to be born before the arrival of missionaries and other outside influences are by now all over 50 years of age. Younger generations have known Spanish all their lives and have lately become accustomed to modern occupations involving tourism and wage labour, activities that were almost completely unknown only one generation ago. Increased mobility and economic resources allow community members to travel outside of the community more than ever before and an increasing number of men choose to live outside of Lacanjá in nearby towns such as Palenque or in the colonial capital San Cristóbal de las Casa.

There are many annotated audio recordings, which include folk tales, personal narratives, songs, and conversation. The language used during elicitation was Spanish. The deposit also contains several video recordings, some photographs, and monthly field logs.

There are multiple Lakandon texts per recording session, and these have been extracted and annotated as separate files, then tagged with the overall session name so that all the extracted stories and the complete recording can easily be found. Each includes a metadata file (filename_m.txt).

Some of the included stories are: the tale of the jaguar that eats a man and takes his place in the house where the man lived; the tale of the siren who is queen of all the fish in the river and steals a man to live in the river with her; and the story of the man who has a “tame” jaguar that ends up eating his wife. One of the principal speakers is Enrique Chan K’iin Panyagua, ~52 yrs (EChK), who is often accompanied by his youngest son, K’ay Yum, 16 yrs (KY).

The project builds on a basic documentation of Lakandon Maya previously performed by the depositor. It aims to produce language resources for the speech community in the form of a dictionary, and at the same time expand the existing corpus to create a larger and more balanced corpus. The annotated corpus will anchor a grammatical description of Lakandon in the form of a reference grammar, which will make possible a more complete understanding of the Yukatekan language family and the internal dialect division of Lakandon. The project involves capacity building and aims to support positive attitudes towards Lakandon Maya in its speakers.