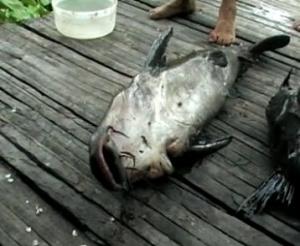 Urarina is an isolate spoken by less than 3,000 people in the area of the Rio Chambira, Loreto Province, North-western Peru. The language exhibits a range of unusual grammatical characteristics that are rarely or not at all found in other languages. While the grammar of Urarina is described in Olawsky (to appear in 2006; Mouton series), the archived materials represent the data on which this research is based.

The Urarina live in a number of small settlements throughout the area of the Rio Chambira and its tributaries. Until recently they have lived in relative isolation. However, there has been an increase in contact with the outside world through the establishment of oil mining operations in the Rio Chambira area, as well as the activities of missionaries and traders. This has contributed to a dramatic linguistic shift to Spanish, which has occurred in some of the Urarina communities, as well as the abandonment of a number of cultural practices. Many traditional customs have already been abandoned. These include knowledge of the production of artifacts such as blowguns and the poison used with these, the absence of previously existing musical culture, and the loss of spiritual practices.

Probably the most comprehensive digital archive based on fieldwork of an Amazonian language.

From a linguistic point of view, Urarina is particularly interesting because of a range of unusual and complicated matters of its grammar. Aspects are the analysis of a complex, threefold conjugation system, the possible absence of ditransitive verbs, and the systematic omission of participants in switch reference.

The study was initiated by the Research Centre for Linguistic Typology (Melbourne) in 2000 and later funded by the Endangered Languages Documentation Programme (London) from mid 2003 to mid 2005. During five separate field trips between one to six months length, a range of texts were recorded and will be archived. In total, 126 texts were recorded, equalling about 17 hours of speech. While these include a wide range of different genres such as conversations, picture descriptions, instructions, and sermons, most are narratives, which can be further divided into several subtypes:

The deposit also contains music recordings, literacy materials (bilingual storybook), wordlists, and video footage. The user is advised to study the metadata (summaries, overviews, and other instructive files) before diving into this ocean of data.