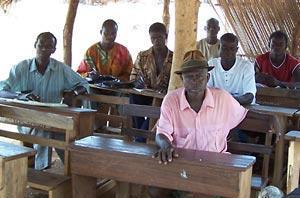 Landing page image for the collection “Bogoŋ: a cultural, historical and linguistic documentation”. Click on image to access collection.

Bogoŋ is spoken by the Chala people, a minority group living mainly to the east of the Oti River in the northern part of the Volta Region, in Ghana.In all but one of the five locations where the majority of the Chala reside as a distinct ethnic group, they find themselves in a minority position. In three settlements, Bogoŋ speakers are in an asymmetrical bilingual situation, speaking either Gikyode or Nawuri, the languages of the respective majority groups in public domains, and using Bogoŋ mainly at home, if at all. The high level of intermarriage with their neighbours is further responsible for the perpetual decline of the language. Thus the number of people of Chala ethnicity contrasts sharply with the number of people actually able to speak Bogoŋ fluently. Fluent Bogoŋ speakers probably number only several hundred. An unknown number of Chala are still found scattered in the central part of Togo and Benin. There they gave up their language long ago, though they have generally maintained their sense of Chala identity. The prospects of Bogoŋ appear particularly grim when considering the situation of the younger generation, the potential guarantors of the survival of the language. They are confronted with English, the official language of Ghana and the sole medium of instruction in secondary and higher education, and with Twi (Akan), the lingua franca of the region, as well as with the languages spoken by the majority groups (and their peers), with which they cohabit.

Bogoŋ, or Cala/Chala, is mainly spoken in a few settlements in the eastern part of central Ghana, in the Nkwanta District, in the northern part of the Volta Region, to the east of the Oti River. Bogoŋ is spoken by the Chala (spelled according to the Ghanaian orthography). Bogoŋ counts as a member of the Eastern Gurunsi languages. Eastern Gurunsi is one of the three branches of the Gurunsi (or Grusi) languages. The Gurunsi languages are a major subgroup of Central Gur or ‘voltaïque central’ (Manessy 1979, Naden 1989). The Gur languages are part of the North Volta-Congo branch within the Niger-Congo phylum (Williamson and Blench 2000).

Bogoŋ is severely endangered on account of several reasons:

Valuable recordings, with transcriptions, including:

The image shows members of the Bogoŋ Language Committee.

Many recordings focus on the environmental vocabulary, thus forming an excellent database for anyone who wants to know how the Bogoŋ interpret their environment linguistically. Related to it is the interpretation and discussion of Bogoŋ place names.