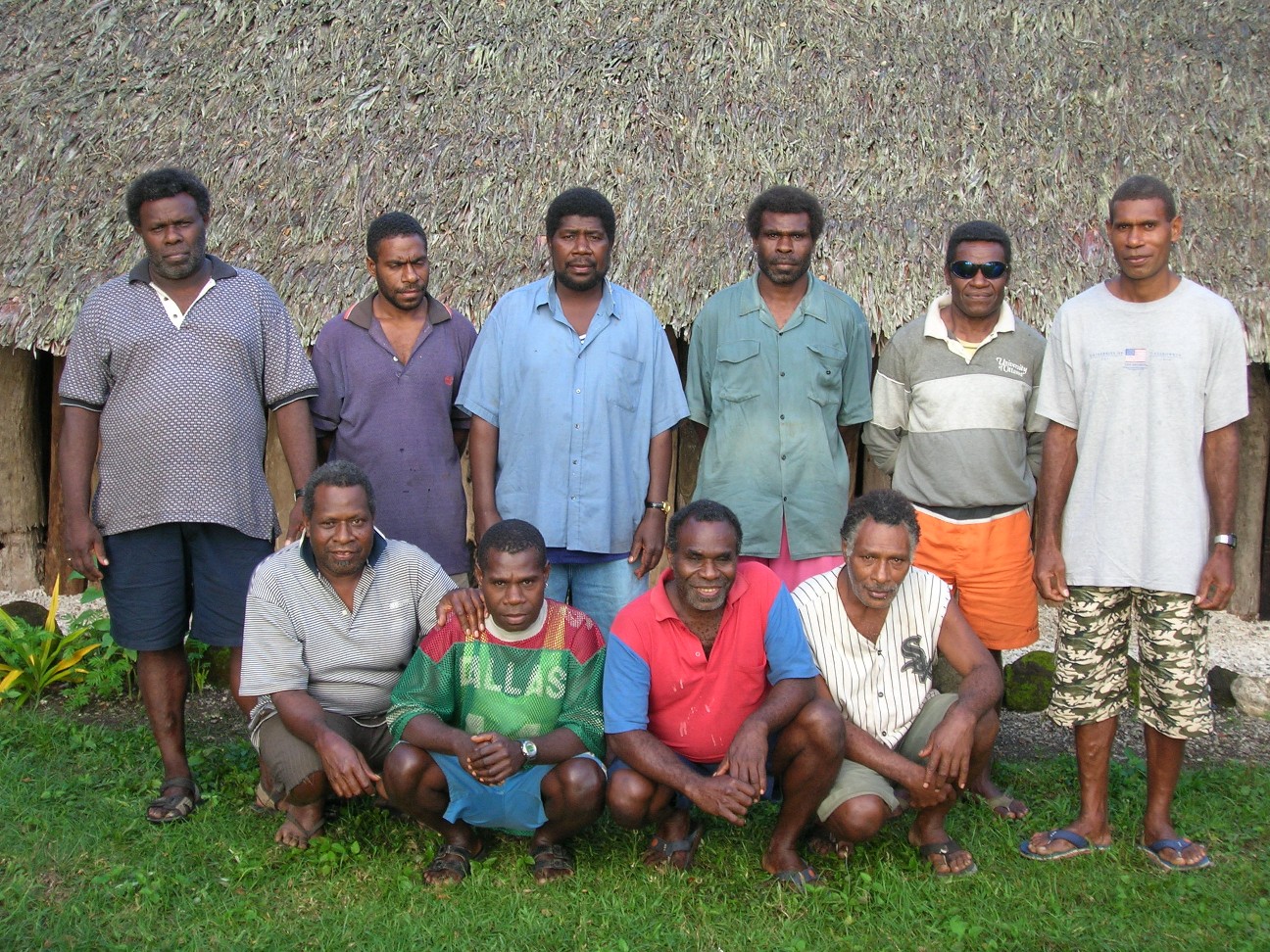 Landing page image for the collection “Audio recordings and images of Bierebo speakers”. Click on image to access collection.

This collection consists of audio recordings and images of speakers of the Bonkovio dialect of Bierebo, spoken on Epi Island, Vanuatu, resulting from fieldwork conducted between July 2005 and September 2007.

Bierebo is spoken by several communities on the central western coast of Epi island, Vanuatu, as well as a small area on its central eastern coast. The main villages where the language is spoken are Bonkovio, Yevali (Yopuna) and Burupika in the West, and Tavio (Lokopui) in the East.

Epi suffered massive depopulation in the 19th century through indentured labour schemes and epidemic disease. All inland settlements were eventually abandoned and the whole population of around 4500 currently lives along the island’s flatter coastal plains. Bierebo-speaking communities moved eastward and westward from the interior resulting in the present day distribution described above.

The collection focuses on the Bonkovio dialect of Bierebo, although some recordings from other dialects are also included.

Bierebo, a member of the Oceanic subgroup of the Austronesian family, is spoken on Epi Island in Vanuatu by around 900 speakers. Bierebo is genetically related to its neighbouring languages (Lewo, Lamen, Baki and Mkir), and along with languages of the other islands in the region – Paama, Malekula, Pentecost, Ambrym, the Shepherds, and Efate – they comprise a Central Vanuatu subgroup of the Southern Oceanic languages.

Since the Bierebo-speaking villages remain relatively isolated and have often been overlooked by foreign settlers, traders, and missionaries in the past, the language may be linguistically more conservative than some other vernaculars whose speakers experienced greater contact with outside groups.

There has been very little previous documentation of Bierebo, only a few word lists and some information on verb-initial mutation. There were previously no known audio or video recordings.

The language is transmitted generationally and is the first language of choice in the home and village environments. However, Bierebo is endangered through language contact and its low number of speakers. Most islanders are bilingual in the national language, Bislama (an English-based creole), which is Vanuatu’s lingua franca and used for most dealings across local language boundaries. Language shift is occurring most often due to exogamous marriages whereby non-Bierebo speaking women raise children monolingually in Bislama. Bislama is also the language used in radio broadcasts and often in church services. English and French are the official languages of government and education though Bislama is widespread in these spheres, too. Speakers in the village of Tavio are also reported to be bilingual with Lewo, the dominant language there, and undergoing language shift.

Additionally, recent linguistic description of the neighbouring Baki language (through Bible translation work) has relegated the status of Bierebo and led to moves for Baki to be used in regional religious contexts despite its community actually having a far smaller number of speakers than Bierebo. It is hoped that documentation work will do much to raise the prestige of Bierebo in relation to neighbouring languages and that it can thus remain a viable local language.

Vanuatu’s national education policy recommends primary education in local languages wherever possible, and reportedly an imperfect orthography exists for Bierebo, but it is not known if Bierebo is widely written. High rates of Bislama literacy are reported for schoolchildren and recent school leavers.

The collection comprises over 120 audio files, as well as a number of images and some translations of narratives into Bislama.

Users are requested to acknowledge the depositor, Peter Budd, when citing resources from this collection.