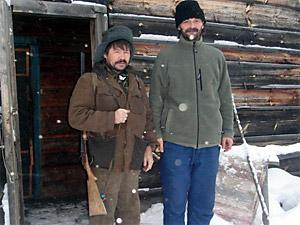 This collection consists of audio recordings of 10 speakers of Mansi, spoken in Ivdel, North-West Siberia, resulting from fieldwork conducted between November 2005 and April 2006.

The image shows the depositor, Gábor Székely (right), with one of his consultants, the hunter Vovka Pakin (left).

The Mansi language (in scientific literature Vogul) belongs to the Ugrian branch of the Finno-Ugrian language family, together with the Magyar (Hungarian), and Khanty (Ostyak) languages. Mansi is an aboriginal language on the territory of the eastern part of the Northern-Ural Mountains whose speakers live in the taiga area by the banks of the rivers of Sosva, Sygva, Upper-Lozva nowadays. According to the census of the Russian Federation in 2002 there were 11 432 Mansi people out of whom only 2764 were considered native speakers of Mansi. By now the results of the last census in 2010 are unknown some preliminary dates show that there were 12269 Mansi people out of whom only 938 said that they speak Mansi language. The language loss has increased to such a dramatic extent that the language change from Mansi to Russian is almost complete. But one finds fluent native speakers of Mansi nowadays along the rivers Upper-Lozva and Upper-Sosva, which is a different region called Ivdel Rayon of the Sverdlovsk District in Russian Federation. According to the census in 2002 there lived 259 Mansi people, 129 out of whom live in the taiga forest.In the past the Mansi people developed a complex economy based on horse breeding and metallurgy in the Ural Region, and they were also skillful hunters who dealt with fur-trade in the Russian Empire. As they began to lose their livelihood for fur-hunting, they gradually lost their traditional trades and began to integrate into the Russian environments, thus losing, almost completely, their ethnic identity and their mother tongue. This process has been going on till today: only sporadic groups of Northern Mansi dialects can be witnessed to be in use in everyday communication. In addition, it is not an easy job to find the taiga hunters in the Northern-Ural Mountains, because they live in small villages (2 or 3 houses altogether) far away from civilization. They still pursue hunting in the Ural Mountains where they have their small, “moving” villages.

The collection comprises over 50 audio recordings and lexical resources organised as 18 basic thematic vocabulary lists, including animals, plants, body parts, dwelling and hunting. It includes also audio recordings of 6 Mansi texts. The recordings contain 3 folktales and 3 readings in standard Mansi language. Transcriptions and free translations to English are provided for the Mansi content.