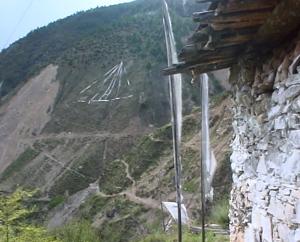 This collection comprises mainly of primary data, including audio and video recordings of Daohua and photos. There are also annotated lexical entries, a text collection, dictionary and research report of Daohua, and a Scheme of the Script System of Daohua (SSSDH).

The group of people speaking Daohua are largely followers of Tibetan Buddhism and regard themselves as Tibetans.

Daohua is also known as Yajiang Daohua. It has about 2,600 speakers in eastern Tibet.

This project aims to create a record of Daohua, which is racing against the rapid development of Chinese economy and western areas. In 2000, there were no electric lights in some mountain villages in the Daohua-speaking region yet. However, only a few years later, televisions and broadcasts have been popularized. Official education and modern mass media have also been popularized with the economic development. Mandarin Chinese is the legal official language and school language. As the government policy states: “the government popularizes Mandarin Chinese as the national language”. Even in the regions of speaking Daohua, there is no exception. Mandarin Chinese is the most commonly used language in school education and mass media. Except Tibetan language, the other subjects, including Mandarin Chinese, mathematics, ideological education, general knowledge on nature, physical education, drawing, music and so on, are all written in Mandarin Chinese. But their mother tongue is not taken into account by the school education. One of consequences of economic development is that more and more people ask for school education. Only a couple of years ago, the local residents were still living self-supporting farming or herding life in the small mountain villages in Daohua region. Just in 2000, the county government announced that the state plan of popularizing elementary education had being implemented. The basic requirement of this plan is that the gross enrollment ratio and net enrollment ratio of school-age children should be over 95%. The main language used at schools and even in the daily communication between children should be Mandarin Chinese at least when children have entered high school.