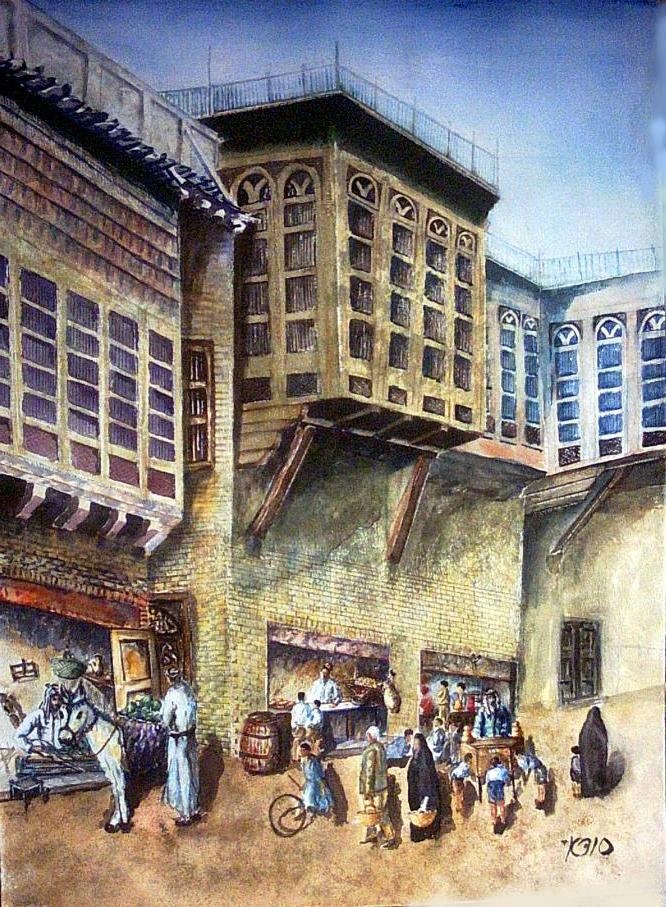 A painting by Eli Sawdayee showing the lane in the Jewish quarter of Baghdad on the way to the Alliance School. Landing page image for the collection ‘Jewish Iraqi spoken language documentation’. Click on image to access collection.

This collection contains personal stories, songs and descriptions of life in Iraq in the twentieth century, as told by Jewish Iraqi informants in London, Canada and Israel between 2006 and 2011 The project was funded by the British Academy and ELDP and carried out by a native speaker, Eli Timan, who also collated, transcribed and translated into English some 10% of the recordings.

Find a newspaper article describing Eli Timan’s work, what motivated him, and the history of the Jewish Iraqi community under this link: Is the Lost Language of Iraqi Jews Really Lost?

The Iraqi Jewish community have lived in Babylonia (present day Iraq) for over 2500 years. They spoke Aramaic for 1,200 years until Iraq was conquered by the Muslim Arabs. Soon after, Arabic became the dominant language in the region. One hundred years later, the Iraqi Jewish community (excluding Kurdistan) abandoned the Aramaic in favour of the Arabic, but with a lot of borrowings from Hebrew, Aramaic and Farsi. By the time of the mass exodus from Iraq in 1950/1951 of some 150,000 Jews, there were more borrowings from Turkish and English.

Jewish Iraqi belongs to the variety of Iraqi dialects in upper Iraq coined by Haiim Blanc as “Qeltu” as opposed to the middle and southern Iraq “Gelet” variety. It resemble the old Mosul dialect with some important differences. The Mosul dialect is itself an endangered dialect and has not been documented. Written work in English about the dialect has been published by Haiim Blanc and Jacob Mansour.

As of December 2009, the time of fieldwork, there were only seven Jews left in Baghdad. Most of the community are settled in Israel and the West and have adopted the language of their host countries. It is hard to find anyone under the age of 45 who speaks the language. The major aim behind the project is to preserve the spoken language for the community/communities’ future generations. These recordings with a very high quality audio will help preserve the spoken language. The research will also benefit Semitics scholars and Iraqi dialectologists.

One interview was conducted with a speaker who left Baghdad recently, in 2003 who had lived with her family with little interaction with the rest of the small Jewish community. She uses a lot of standard Arabic in her speech. It is fascinating to observe the development of the language over 50 years. Although the accent, phonetic and grammar rules of Jewish Iraqi were maintained (unconsciously) in her speech, a lot of the morphology was modern Baghdadi with a lot of standard Arabic expressions.

The deposit also contains original paintings by consultants, which are the focus of discussions by Eli Sawdayee, who painted them.

In total, there are some 100 hours of interviews were conducted in Canada, the UK and Israel. Handwritten field notes on recording sessions and speakers (metadata) were taken. Phonemic transcriptions and English free translations of sample recordings were done using ELAN software. A database of these recordings was established on an Excel workbook with linked datasheets. There are also original paintings on which some of the stories are based.

The age span of the speakers was between 45 and 93 years old. Priority was given to interviewing older speakers for obvious reasons. Speakers came from a wide variety of social backgrounds. Speakers in the UK tended to be more educated and well off, but Israel offered the widest social and cultural distribution. As expected there was constant language code switching to and from the host country language as well as to Muslim Baghdadi dialect which was the common dialect for communicating with people outside the JI community in Iraq. Frequent switching to classical-standard Arabic was observed mainly by speakers who were journalists, lawyers, writers or poets.

A wide variety of topics are covered, including life in the old oriental houses in Baghdad, schools, marriage, and historical events affecting the life of the Jewish community in Iraq. Also covered were the years just before the mass emigration/deportation from Iraq and the early difficult years in Israel when immigrants were living in tents and tin-roof shacks for up to seven years. Interviews were also conducted with speakers who stayed in Iraq and lived during a very difficult period under the Baath regime between 1967 and 1971, including the wives and children of people who were hanged or killed during this difficult period.

Three separate projects were involved in gathering and preparing the materials in this collection.

The first project started in 2006, financed as a pilot study by The British Academy and supervised by Professor Peter Austin director of the Endangered Languages Academic Programme, who also provided training and technical help with David Nathan, director of the Endangered Languages Archive. Transcription methodology was established in consultation with Professor Bruce Ingham at SOAS, an expert on Gulf Arabic dialects. Latin script was used as in an English keyboard so that the speaker community could read and search the script easily.

Two further small project grants were financed by the Endangered Languages Documentation Programme in 2008 and 2010 to extend the variety of cultural and social background of the speakers as well as their age.

Since 2003, there has been extraordinary interest in Iraqi Jews and so these recordings now represent a living history of their life.

Eli Timan publishes his materials and further information in other open access outlets and is progressively uploading the materials to channels such as Soundcloud and YouTube so that second and third generation community members, who do not understand the dialect, can access the materials more easily.