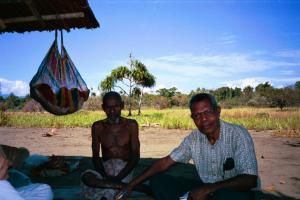 This deposit will be result of field research on the languages in Sandaun Province in Papua New Guinea, resulting in a detailed grammatical description and dictionary of Walman. The data was collected by Matthew Dryer and Lea Brown between 2002 and 2007.

Walman is a Papuan language from the Torricelli family spoken on the north coast of Papua New Guinea, where there has been close contact and frequent fighting with Austronesian groups for at least two centuries. Austronesian influence on vocabulary is recognizable in some cases, yet there has been no influence on the syntax of the language which, like other Torricelli languages and unlike most other non-Austronesian languages, is SVO. An unusual phonetic features is a prevalence of extensive consonant clusters.

The deposit comprises audio files and transcriptions, some video files with transcription of the audio compnent, a draft dictionary and grammar, as well as copies of the depositors’ fieldnotes. Genres include narration, conversation, and elicitation from various speakers of phonetic features of importance in the language as well as words containing unusual phonetic features, and readings by one consultant of sentences he had written to illustrate words from the dictionary. Also included are pdf copies of 56 texts collected by missionary Father August Becker and his local assistant in the early part of the twentieth century, with original German translations, and retranscriptions into the modern Walman orthography with translations into English.

The data was collected by Matthew Dryer and Lea Brown between 2002 and 2007.