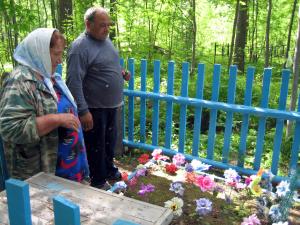 A comprehensive archive of all Middle Chulym (Ös dili) project materials, including unedited video, audio, photos, lexica, and field notes, as well as processed, edited and annotated recordings, scholarly articles, and a documentary film containing Chulym materials. Interviews with 12 of the remaining speakers (estimated to number no more than 20 persons), including several who are now deceased. Copies of legacy data collected by other scholars is also included. This collection contains the only known video and audio recordings of this language.

According to an ethnographic survey conducted by V. P. Krivonogov (1998), in 1997 there were 115 self-reported ‘fluent speakers’ of Middle Chulym, of which only 11 claimed to use it as the primary language of spoken communication, while 24 reported that they spoke Middle Chulym as often as they spoke Russian. However, the researchers’ field survey, conducted in July 2003, suggests that the total number of actual speakers, including semi-speakers, is fewer than 50 out of a population of 426.

The youngest fluent speakers of Middle Chulym the researchers found are approximately 50 years old. In fact, there are only two or three fluent speakers under the age of 60. Most speakers are in the range of 70-90 years old. There are some Middle Chulym people between ages 40 and 60 who possess a passive knowledge of the language, e.g., they can follow the gist of stories told by elders but cannot form sentences in the language. No one under 40 appears to have even a passive knowledge of the language, save for one or two native words that even local Russians sometimes know (e.g., moƒalak ‘bear’). No Middle Chulym monolinguals remain. These sociolinguistic facts classify Middle Chulym as moribund according to Krauss’s (1992) four levels of endangerment. In Wurm’s (1998) five-way classification, it would be seriously endangered, and in Kinkade’s (1991) typology it falls between endangered and nearly extinct.

All inter-ethnic communication is carried out in Russian; thus, Russian is the dominant language in all the Middle Chulym communities, including the single one with a majority Chulym population (e.g., Novoshumilovo village). Middle Chulym is used primarily in social contexts among elderly community members and on rare occasions in formal contexts such as meetings of elders in community halls. Middle Chulym has no official status and is not used in any educational or media contexts.

The Middle Chulym people speak one of the most critically endangered and least documented native Siberian languages. The Middle Chulym nation numbers 426 registered members, and occupies territory along the upper reaches of the Chulym river (native hydronym [Os]) in Tomsk and Krasnoyarsk districts. The Middle Chulym language is Turkic and a peripheral member of the Altai-Sayan areal grouping of Turkic languages, though geographically located north and west of this mountain complex.

In the Russian linguistic tradition, the languages of the Middle Chulym and the Lower Chulym are regarded as dialects of one language, called Chulym Turkic (in Russian, chulymsko-tjurkskij jazyk). The Lower Chulym or Küärik-Käzik people are currently distributed in the northern part of the Chulym territory, in the villages of Tan’kij, Minaevka, and Perevoz near the city of Tomsk, among others. They have been almost fully Russianized linguistically.

The above grouping notwithstanding, Middle Chulym is considered by its remaining speakers to be a separate language from Lower Chulym, and this claim is justified by the linguistic data. Middle Chulym is unintelligible to Tatar-speakers to the west and the Xakas speakers to the southeast. Nor is it mutually comprehensible with Lower Chulym; the two appear to be about as different as Portuguese and Spanish. However, perhaps unsurprisingly given their historic proximity, the two Chulym varieties share certain linguistic features which set them apart from other Turkic languages. Middle Chulym has neither a grammar nor a dictionary nor any published texts.

This deposit contains the only known video and audio recordings of this language.

Middle Chulym has a range of features that are noteworthy, both for general typology and for comparative Turcology. Features that merit exploration include patterns of inflection in auxiliary verb constructions which in some instances appear to deviate from the standard European or even local Altai-Sayan Turkic model. In the Turkic family, Middle Chulym stands out due to its atypical present tense formation and its unique future tense formation. The researchers took a particular interest in restructuring in the vowel harmony system. Due in part to obsolescence and Russian contact, the harmony system has become considerably more abstract (non-surface-true). Even with a tiny population of speakers, markedly different behaviour among speakers can be found: Some treat surface-disharmonic segments as being transparent to harmony, while others treat these same segments as opaque and as initiating a new harmony domain.

Middle Chulym reflects a number of lexical loan strata. In addition to the expected Russian and Mongolian words typical of Siberian languages, we found some unexpected forms. For example, the word araZan, deriving ultimately from Sanskrit rasa´jana ‘elixir of life’, has the unique meaning ‘vodka’ in Middle Chulym rather than the expected meaning ‘mineral (hot) spring’ ubiquitous across South Siberian Turkic. Middle Chulym also possesses many words reflecting the traditionally practiced hunting, gathering and fishing lifestyle. In the process of language shift, whole semantic fields encompassing Middle Chulym knowledge of the ecosystem and indigenous technologies are being lost. One explicit means of linking the lexicon to the environment is the traditional 13-month lunar calendric system: Among the Lower Chulym several native month names are associated with fishing, while the Middle Chulym, we found, use more hunting-related month names in their calendar.

Most materials collected by David Harrison personally with Dr. Greg Anderson. Small amounts were contributed as legacy data by the Tomsk Laboratory of Siberian Languages.

Although the language is unwritten, the researchers found one instance of a Middle Chulym speaker who had rendered his language in writing. An accomplished hunter and vice-president of the Chulym tribal council, Mr Vasilij Gabov kept a hunter’s journal written in Middle Chulym over a period of three years. He devised his own modified Cyrillic (Russian) orthography to render the language. At the rearchers’ request, in July 2003 he easily wrote down a moose-hunting story in this orthography. The researchers plan to use Gabov’s orthography (with slight modifications to account for a couple of distinctive sounds in the language he did not represent) as the basis for publishing a book of Middle Chulym stories. This work has already begun and is being carried out with guidance and input from Mr Gabov at every stage. As the entire Middle Chulym community is literate in Russian, a modified Cyrillic that introduces no new symbols appears to have a good chance of being accepted by the community. The publication of the researchers’ book Os chomaktar (‘Chulym stories’)—the first ever in Middle Chulym—will have a further positive impact on attitudes towards the language and its use.