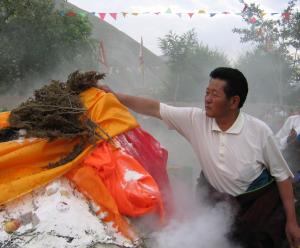 Wutunhua is spoken by approximately two thousand people in Tongren County (Chinese: 同仁县; Tóngrén Xiàn) which is in in the eastern part of Qinghai provence in western China. The population is concentrated in two villages Upper and Lower Wutun on the eastern bank of the Rongwo River.

Wutunhua is a mixed language with the majority of lexical items coming from Chinese and the remainder form Tibetan and some limited borrowings from Monguor. The sinitic portion of the lexicon has undergone significant changes in phonology due to intense contact with Tibetan and tone has lost virtually all functional load in the language.

The language has SOV basic word order with nominative accusative alignment. Noun phrases are head-initial and take case and number marking. Adverbs precede the predicate which can be followed by a number of complement verbs and auxiliaries most of which are of Chinese origin.

This deposit contains video and audio recordings by various speaker of different ages. The corpus of audio recordings is annotated in Chinese and is temporarily transcribed in ‘Scheme of the Script System of Wutunhua(SSSWTH)’ and will eventually be updated with IPA transcriptions. The deposit also includes a lexicon with Chinese, Tibetan and English glosses.

A large number of photographs are also included in the deposit.

The Wutunhua language is spoken by approximately two thousand people, most of whom are officially classified as belonging to the Monguor (Chinese: 蒙古尔) / Tu (Chinese: 土族) ethnic groups. However, Wutunhua speakers generally identify themselves as Tibetan.

The deposit also includes a lexicon with approximately six and a half thousand words. The lexicon gives each head word in IPA and glosses in Chinese, Tibetan and English. There are also audio recordings to accompany the lexicon.