Primary data of Vasyugan and Aleksandrovo dialects of Eastern Khanty 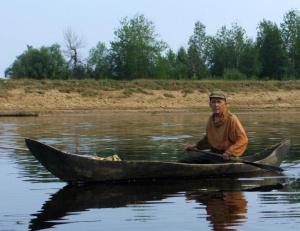 Landing page image for the collection “Primary data of Vasyugan and Aleksandrovo dialects of Eastern Khanty”. Click on image to access collection.

The project is sponsored by an ELDP grant and pursues field documentation of language data and meta information from two related and geographically adjacent endangered dialects of the Eastern Khanty language, in the Tomsk region of Russia: Vasyugan and Alexandrovo. The total number of speakers is less than 100. Multimedia data has been recorded and archived in unified, conventional and accessible formats, resulting in a lexical database, corpus and preliminary data description. The team of linguists, experienced in the area and having a working knowledge of the language, conducted field visits to the Vasyugan and Alexandrovo Khanty communities, and documented the dialects in their natural functional environment.

Khanty (a.k.a. Ostjak) forms, together with Mansi, the Ob’-Ugric subgroup of the Finno-Ugric branch of the Uralic language family. Khanty is a group of dialect clusters or languages: Western and Eastern. The dialects of interest in this study are a continuum of related river varieties of Eastern Khanty: Vasyugan and Alexandrovo. These are particularly interesting as they represent reportedly more archaic and rich language systems in terms of morphosyntax. The total number of speakers of these diverse, linguistically prominent and extremely under-documented varieties is rapidly decreasing, principally placing these dialects in the group of languages in danger of extinction within a single generation. Eastern Khanty dialects demonstrate numerous features that attract considerable typological and sociolinguistic interest.

The activities of the project focused on obtaining language data and metalinguistic information in a natural functional environment, archiving the data and representing it in accessible formats. The acquired language data underwent preliminary processing, narrative discourse has been interlinearized and parsed, forming the Eastern Khanty corpus, to be used as a tool for educational and academic purposes. One of the outcomes of the project is also the tri-lingual Khanty–Russian-English dictionary in ToolBox format. The data has also been made available on CD/DVD-media and on the web. Members of the Eastern Khanty communities have received printed copies of selected texts, the dictionary, as well as audio and video materials.

The project’s broader impact comes from continued collaboration with representatives of the communities in language documentation and ethnographic research. To cater for community ownership and accessibility of the outcomes of the project, the archived audio/video documents will be accessible to the community representatives as well as to NGO’s, official agencies, media and academics active in the area.

This deposit records the speech of what may be the last fully proficient speakers of Vasyugan and Aleksandrovo Khanty.

The project’s researchers enjoy close cooperation with indigenous communities, established over a period of long-term fieldwork. The research team tested, refined and implemented modern research methodology, documentation and archiving techniques; and performed initial familiarization of community representatives with the nature of language documentation. The documentation project serves as a logical extension in the scope and depth of a pilot language database, encompassing a larger number and social strata of speakers, a wider variety of endangered western Siberian dialects, and more diverse speech genres.

The project is also important for typological observations, to secure the maximally authentic, diverse, and quantitatively significant corpus of naturally occurring language data, along with the accurate metalinguistic information. Such key research fields as Areal Linguistics, Sociolinguistic Analysis, Comparative and Typological Analysis, Aspects of Language Contact and Diffusion of Linguistic/Cultural features in the Ob-Yenisei area of Siberia, will benefit significantly from the project’s outcome. Thus, the project fills the empirical gap, existing with regard to some Siberian languages, particularly Eastern Khanty.

The video files are stored in two modes: high quality mpeg1 format and downsized mpeg4 format. Video and audio recordings have been transcribed, and some of these texts are converted into ELAN multimedia format combining video, audio and text media.

The texts were narrated by male and female Khanty speakers to the researchers, who also spoke limited Vasyugan Khanty and Alexandrovo Khanty and offered occasional interjections to the narration. The recording of the text was transcribed and translated into Russian, while English glosses and free translation were added at a later time.

Most of the texts were recorded on a primary device, the stable state recorder using the external microphone and are stored in the database in the WAVE format. Recordings were also performed on a back up device (HiMD MiniDisc recorder) using a separate external microphone to address the risk of equipment failure. As a result, in cases when the primary device did malfunction, recordings were made on a back up device and are stored in the database in the MP3 (MPEG) format with the highest available sampling rate. Back up and working copies of all the sound files were made in MP3 (MPEG) format for faster operation.

These texts were recorded in 2007 in the upper and lower Vasyugan river areas, and in the Alexandrovo Ob’ river Khanty communities.

These Eastern Khanty materials were recorded, transcribed and archived by the ELDP FTG0135 project participants, members of the Tomsk Deparment of Siberian Indigenous Languages.