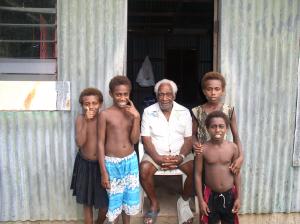 This collection consists of annotated audio recordings of speakers of Mavea, spoken in Vanuatu, resulting from fieldwork conducted between June 2005 and December 2007.

Mavea, also known as Mafea.Mafea is spoken on the eponymous island Mafea, off the southeastern coast of the island Espiritu Santo. The exact number of Mafea speakers remains to be determined. According to a survey by Lynch and Crowley (2000), there are now approximately two hundred and fifty speakers. However Lynch and Crowley also note that Mafea speakers have started migrating to the more economically prosperous island Espiritu Santo.Such a geographical shift may lead to an irreversible linguistic shift.

Languages in Vanuatu have been divided into two major subgroups – Northern Central and Southern (Clark 1985). Clark estimated the Northern Central subgroup consists of approximately 94 languages, 28 of which spoken on Santo. Clark subdivided these 28 languages into 3 smaller subgroups: Northwest, South, and East, and affiliated Mafea with the “South Santo” subgroup. Tryon’s (1976) linguistic survey seems to indicate that Mafea is indeed related to Tutuba, spoken on the Southeastern coast of mainland Santo. To a lesser extent, Mafea seems also be affiliated to Malo, spoken on the eponymous island off the southern coast of Santo, and Tangoa spoken in Southern Santo. However, the inclusion of Mafea in this subgroup rests on a holistic approach. It is based on Tryon’s (1976) lexicostatistic analysis of the languages of Vanuatu, and on the use of linguo-labial consonants as an areal feature of the South of Santo (and northwest Malakula), which are extremely rare cross-linguistically.

Interestingly, Mafea is located at the border of two of Clark’s linguistic subgroups -South Santo and East Santo- the latter group being well-known for its phonological complexity (Guy 1974). Due to its pivotal geographic situation Mafea could be the end of a dialectal chain, linking the Southern and Eastern language groups. However, it is just as plausible that Mafea is a language in its own right. Its geographic position may have fostered lexical and grammatical innovations.

Any definite conclusions regarding the classification of Mafea in the South Santo subgroup are yet to be established. The paucity of the data on Mafea and other Santo languages makes it difficult to define such a subgroup, and, at this point, we can only speculate about the linguistic affiliation of Mafea.

The collection contains over 160 audio files, many of which come with time-aligned transcriptions and gloss in English.