Vanishing Voices of the Great Andamanese 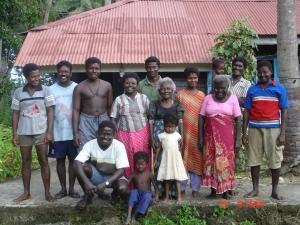 Landing page image for the collection ‘Vanishing Voices of the Great Andamanese’. Click on image to access collection.

This collection is the result of Vanishing Voices of the Great Andamanese (VOGA), a major language documentation project which was undertaken from 2005 to 2009 in the Andaman Islands. Under the auspices of the Hans Rausing Endangered Languages Project, Professor Anvita Abbi and a team of research assistants spent approximately 40 months in the Andamans, documenting Great Andamanese and producing descriptive and theoretical work on the language. As well as this deposit on ELAR, there is also a website at http://www.andamanese.net/ with further information about the project, a published dictionary at http://www.andamanese.net/dictionary.html with accompanying CD-ROM and a forthcoming grammar of the language at http://www.andamanese.net/Grammar_Notes.html.

Present-day Great Andamanese (PGA) is a highly endangered language; when the VOGA team first visited Strait Island, the current home of the tribe, there were nine speakers. By the time the team left the Andamans for the last time in 2009 there were only six left. The last speaker of Bo, a variety of Great Andamanese, also died in January 2010. At present there are only five speakers with varying degrees of competence in the language. PGA is also a complex and diverse language; it is a koiné formed from four surviving northern Great Andamanese languages: Khora, Jeru, Cari and Bo. It draws its lexicon from all four of these dialects but its grammar is primarily based on Jeru. It displays highly unusual grammatical features such as body part prefixes modifying all parts of speech. Perhaps most importantly, PGA is a unique language; there is strong linguistic and genetic evidence to suggest that the people of the Andaman Islands represent a distinct genetic group who populated the islands from the mainland tens of thousands of years ago. The language is a fast-closing window on a very ancient form of cognition, or as Nicholas Ostler puts it in his review of the dictionary: “700 centuries of unique experience terminated in just two.”

In addition to the Great Andamanese, there are three other distinct indigenous ethnolinguistic groups inhabiting the Andamans: the Jarawa, the Onge and the Sentinelese. All the languages spoken by these peoples are endangered as their population bases dwindle and Hindi extends its reach ever further in the islands. Great Andamanese is the closest to extinction, however; today only two of the four northern varieties of the language survive. The other two, Khora and Bo, became extinct with the passing of their last speakers Boro Sr. and Boa Sr. respectively.

Little is known about the affairs of the inhabitants of the Andaman Islands until the arrival of the British in the 1860s. The early colonists reported around 5000 people living as hunter-gatherers. At that time there were ten distinct varieties of Great Andamanese named after the ten tribes which spoke them. An estimated 3000-3500 Great Andamanese people lived right across the group of islands known as the Great Andaman. By the time of the 1901 Census of the islands, this number had fallen to just 625. It seems that contact with mainlanders had a devastating effect on the indigenous population, as Edward Horace Man noted: “The interesting Negrito race inhabiting the Andaman Islands is doomed to early extinction — save possibly the small section occupying Little Andaman.” (27th June 1918).

By the time of the VOGA team’s arrival in 2005, this ominous prediction had sadly been borne out; the number of the Great Andamanese had dwindled to just 51, with only ten members of the tribe still able to speak some form of the language. When the team first encountered the people, they found their lives further blighted by the 2004 tsunami, which drove them from their homes in Strait Island and forced them into temporary shelters in the Andaman capital of Port Blair. Many of the earlier recordings in the deposit were made in this difficult period. The people were often withdrawn and unwilling to collaborate with the VOGA team, preoccupied as they were with dealing with the difficult situation in which they found themselves. In late 2005 the members of the tribe returned to their homes in Strait Island, a small island to the northeast of Port Blair. The later recordings were all made there.

The Great Andamanese of today live on subsidies provided to them by the Indian government, though some members still continue their traditions of fishing for crabs and other sealife and hunting turtles. Gathering tubers and potatoes, however, is now virtually non-existent. Most tribe members understand Hindi, Bangla and a few words of English as well as some words in Great Andamanese. Children under 16 now do not speak or understand the heritage language. The main language of communication amongst members of the tribe is the Andaman variety of Hindi.

The material in this deposit is an assembly of audio and video recordings, texts, books, articles and images, which together make up a linguistic and social ethnography of the Great Andamanese people.

The content covers many areas of interest relating to the Great Andamanese language and its speakers. It includes recordings and analysis of the sounds, words, morphology and sentence structure of the language as well as many examples of speakers explaining the meaning of Great Andamanese words and utterances in the contact language Hindi.

There are recordings of narratives and folktales with accompanying transcriptions, as well as recordings of less structured forms of discourse like conversations and discussions. Songs and other performance genres in Great Andamanese also make up a significant part of the deposit, for example Pao Buddha singing a dugong hunting song (http://hdl.handle.net/2196/00-0000-0000-0007-CD2C-3).

Below is a list of contents, partially with links to relevant materials in the deposit. You can search and filter the deposit using the keywords, topics and genres in the left hand column. Since the data was deposited, there has been significant reanalysis, particularly of the syntactic structures of the language. The published dictionary and the forthcoming grammar contain the most up-to-date information.