Folktales and interviews in Brunei – Dusun 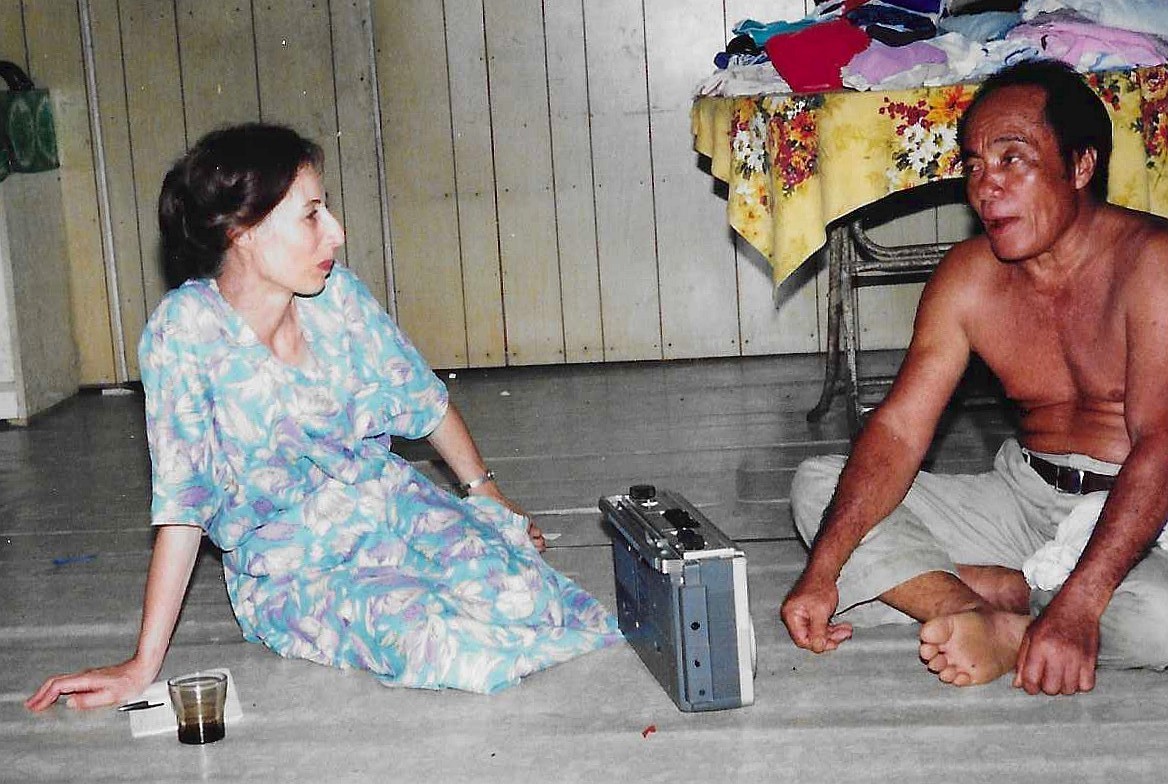 Landing page image for the collection ‘Study of the Dusun language of the Brunei Dusuns of the Tutong District’. Click on image to access collection.

The material comprises 50 hours of selections from folktales and interviews recorded on audiocassettes in Brunei between 1986-93. The respondents were all of the middle-aged to elderly generation as of that time (several are now deceased), speaking a “pure” form of their language, that is, the form in which they had previously narrated the folktales or which was current at the time of the historical incidents and social scene described in the interviews. As no member of the younger, Malay-educated generation was ever-present (and the interviewer spoke only Dusun), there was no “modernising” adaptation of the language for their benefit. Every single recording is accompanied by a transcript.

The Dusuns of the Tutong district in Brunei. The Dusun community was already in the 1990s on the point of disappearance through linguistic and cultural assimilation – processes mainly promoted by a Malay Absolute Monarchy but also to some extent a consequence of economic development, urban employment, and intermarriage. Perceptive Dusun observers already then predicted “no more than another 50 years” for the existence of the Dusun language in Brunei. Even this may have been optimistic, since already in the 1990s the generation of young parents no longer spoke the language to their children.

The language recorded is commonly called “Dusun” but this name is no longer generally interchangeable with “Bisaya” (the dominant language of Brunei’s Limbang District) as it was in the past. While Its speakers are officially termed “Dusun”, within the community Dusuns often called themselves and their language ”sang jati” and “tuntut sang jati” respectively. In the early 1990s, the estimated number of Dusuns in Tutong district did not exceed 10,000, 5,000 in Belait.

As for oral literature, the transmission of folk-tales ceased no later than 1975, with the advent of television. The stories I collected may not fall far short of what still existed at the time of recording. They were published as: Dusun Folktales. Eighty-eight Folktales in the Dusun Language of Brunei with English translations Compiled and translated by Eva Maria Kershaw; Southeast Asia Paper No.39, Center for Southeast Asian Studies, School of Hawaiian, Asian and Pacific Studies, University of Hawai’i at Manoa, 1994.

50 hours of transcribed folktales and interviews recorded in Brunei between 1985-93. Dusun has now been replaced almost entirely by Malay among children whose parents have ceased to talk to them in Dusun.

The language in the recordings is now effectively lost, as the respondents and their contemporaries have passed or are passing from the scene, and as more Malay-assimilated forms take over, or are replaced entirely by Malay among children whose parents have ceased to talk to them in Dusun.

In the first instance, I needed to digitize my over 80 cassettes of general interviews with the oldest persons left in the villages and their folk tales before their knowledge was lost. All recordings are precious to me, but one stands out from the rest. On a visit to Bukit Sawat in the Belait area, Jemrut Kenyah allowed me to record her solitary monthly ritual offerings to her personal spirit helper and transcendent husband, calling the spirit in her own ritual language that is understood only by her spirit. In very recent times the Brunei government has adopted a posture of collaboration with an international UNESCO project for the preservation of folklore, but nothing is allowed to overshadow the state ideology of “A Malay Islamic Monarchy “, or Negara Melayu Islam Beraja.

The data of the collection was collected by me over a period of almost nine years (1985- 1993). I originally followed my husband to Brunei in 1984 and was introduced to the Dusun community in mid-1985. It was then that the idea of learning the Dusun (Bisaya) language was first considered. Having found an old, unoccupied, multi–family house to stay in at Bang Diok in the Mukim (parish) of Ukong at the end of 1985, I began collecting lexical material, which in turn familiarized me with Dusun customs and religion.

My incipient endeavor quickly received active assistance and support from a neighbor, the octogenarian Narak Buntak. He turned out to be an authority in questions of custom and religion. Moreover, his youngest son Ringkas, whose knowledge of English was good enough to understand the questions which I had prepared for Narak and was able to put them to Narak well before my linguistic skills were adequate for conducting interviews on my own. All these sessions took place in Narak’s house, called ‘Anak Tuno’, invariably after the evening meal, with only Narak, his wife Ruput, Ringkas, and myself present. Narak took great pleasure in passing on whatever he knew on any particular subject — firstly to his son, then increasingly to me.

After the physical demise of my old house in Bang Diok in June 1988, I took up temporary residence at Bukit Udal in the Mukim of Tanjong Maya. It was here that I made the acquaintance of Pangan Runtop, son of a distinguished headman and himself an expert on all legal and historical matters. Being house-bound after a severe stroke, he valued my regular visits and was more than willing to answer my endless questions. He was acutely aware of my total ignorance regarding Dusun agricultural and cultural practices. He explained minute details with immense patience and did his best to ameliorate a number of speech problems that he had suffered since his stroke. Pangan also turned out to be an accomplished story-teller.

I have used the material extensively in the following publications:

2000 A Study of Brunei Dusun Religion. Ethnic Priesthood on a Frontier of Islam. Borneo Research Council, Monograph Series No 4.

As a joint author with my husband Roger Kershaw:
2011 Writing an Identity. Content and Conceptions of a Brunei Dusun “Constitution” of1981. Borneo Research Council, Monograph Series No 12.

This collection is the creation of Eva Maria Kershaw, who collected the material during nine years of original, extensive and sometimes obstructed study of this disappearing native language of Borneo.