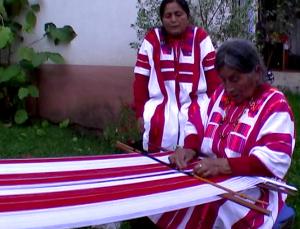 This corpus includes recordings (video and audio) of spoken Tseltal. It includes mainly conversations, narratives, interviews, prayers, and handicraft performed with explanatory and technical discourse. Most recordings are from the Oxchuc dialect, but some others are from the Tenejapa dialect and one is from Guaquitepec.

Traditional life of Tseltal communities has been described by anthropologists like Villa Rojas 1990, Guiteras Holmes 1992, Nash 1993 and Esponda Jimeno 1994, among others. These studies depict a complete panorama of social organization, systems of cargos (communitarian rotative position of responsibility), kinship, socioeconomic activities, religious and symbolic rituals, myths and beliefs of several Tseltal towns. The work of Brent Berlin and colleagues on Tseltal zoological and botanical folk classification and medical ethnobiology (1974 and 1996) highlights a complete range of traditional knowledge about the natural environment and the use of natural resources.

Tseltal (or Tzeltal) is a Mayan language of Chiapas, Mexico, without functional literacy. It belongs to the Tseltalan branch of the Mayan family together with Tzotzil, its closest linguistic relative. With more than 300.000 speakers, some of its dialects are immediately endangered, and all are undergoing rapid and unpredictable processes of language shift towards Spanish.

Mayan languages are a privileged observatory for linguistic phenomena such as: ergativity, voice systems, numeral and nominal classifiers, applicatives, constituent order, and focus and topic among others.

Tseltal has no official orthography and its literature is still embryonic, with a few bilingual books published each year, mainly folk stories, with very low diffusion. Tseltal language is not functional out of the context of the community, there is hardly any broadcasting in Tseltal in radio, and none in television or mass media. Official bilingual education exists but is still impregnated with the ideology of assimilation (basic alphabetization in Tseltal as a step towards complete hispanization).

The main factor of language maintenance has been geographic isolation and socioeconomic exclusion. However, this situation is now changing with the spreading of Spanish language schooling, the extension of road network and communications, the fall of farmwork economy, the privatization of communal lands and an increasing emigration of young people towards the United States.