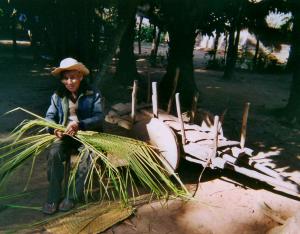 English: Audio and video recordings with transcriptions and photos of speakers of Reyesano, a highly endangered language spoken in Reyes, Bolivia, resulting from fieldwork conducted between April 2003 and October 2005.

The Reyesano community (also called Maropa) are an ethnic group of about 4000 people. Most Reyesano people live in and around the two villages of Reyes (hence the name ‘Reyesano’) and Santa Rosa in the Ballivián province (Beni department) in the Amazonian plains of Bolivia, south of the Takana territory, close to the eastern foothills of the Andes.

Reyesano are not officially represented by any local organisation. However, the new Bolivian Constitution of 1992 recognizes the rights of indigenous people to their culture and language; and the national organization Central Indígena del Oriente Boliviano, together with the Ministry of Education, the Sub-Ministry of Ethnic Affairs, broadly represents their interests.

Reyesano is one of the most endangered and least known languages of the Takana family from the Amazonian rainforests of northern Bolivia and eastern Peru.

Very little is known about the five remaining Takana languages (Araona, Cavineña, Ese Ejja, Takana and Reyesano), but like other Amazonian languages they are of interest to linguists for their typologically unusual features and what they can show about the history of South American languages and populations – for example, about their relationship with the Pano language family of northern Bolivia, Peru and Brazil.

Features of typological interest include the cross-referencing system (unusually realised as second position clitics and with a split-ergative pattern depending of factors that are extremely complex to determine), the verb morphological structure (highly polysynthetic), and the auxiliaries/copula construction (with an unusually high functional load).

The Reyesano language is almost extinct and has not previously been documented, apart from an unpublished word list. Most Reyesano are monolingual in Spanish, but there are still some elders who speak the language.

English: The collection comprises over 230 audio and video recordings, transcriptions and Spanish and English translations of some of the recordings, photos, dictionaries and grammars.

The recordings include descriptions of life, the natural world and traditional activities, stories, and elicitation of vocabulary.

This project follows the researcher’s previous fieldwork on the Cavineña language, another member of the Takana family.

These recordings are also stored in the library of the Bolivian national indigenous organization Central Indígena del Oriente Bolivino (CIDOB) at Santa Cruz de La Sierra, and the laboratory of Dynamique du Langage at Lyon.