Linguistic and ethnographic documentation of Baram 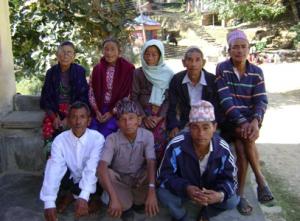 Deposit page image for the collection “Linguistic and ethnographic documentation of Baram”. Click on image to access collection.

This deposit presents the outcomes of an extensive language documentation project, carried out between May 2007 and October 2011. It is a documentation of the highly endangered Baram language spoken in Nepal, which is on the brink of extinction. With the help of the documentation team initiatives have been set up to attempt to revitalise the language. Still, the present situation of Baram language is critical. According to the 2001 CBS Report, the total population of the Baram is nearly 7800. Only about 4.4 percent of these people speak the Baram language and 95.6 percent of the total populations have completely shifted to other languages. Most of the speakers are old, and all are bilingual. Baram language use is limited to only a few domains of communication and Nepali has taken over in most domains such as education, mass media and wider communication.
The younger people of the Baram population have passive knowledge only and do not use the language. Children do not have any knowledge of the language.

In the past, Barams were not allowed to join the army (be it the Nepalese army, the Indian or the British army), nor the police, which meant they had to identify themselves as Gurungs and Magars if they did want to join the army, thereby abandoning their Baram identity and language. Another cause for Baram to become less frequently used was marriage. In the inter-village marriage system, a person would marry outside the village and stop using the Baram language in order to be able to communicate with his or her spouse and family-in-law. Data from the sociolinguistic research carried out by the documentation team shows that the inter-generational transmission of the language has been discontinued completely.

The documented language is Baram, a Tibeto-Burman language of Nepal. It is spoken by the Darai people in Chitwan and Tanahun Districts in Central and Western part of Nepal. With less than 50 speakers remaining, the minority language is seriously endangered. The national language of Nepal is Nepali, used as lingua franca, and the major medium of education at schools. As Nepali is increasingly used as the primary language, it poses the greatest threat to the endangered languages of Nepal.

This deposit contains a large collection of recorded texts, including audio and video files, transcriptions and annotations in ELAN and Toolbox and IMDI files containing metadata relevant to the recording. Furthermore, the Annexes include many other other related resources such as a sketch grammar, lexicon and ethnographic profile. The collection records the many different aspects of the cultural life in the Baram community. It includes conversations between the older members of the community, telling each other stories about their life experiences. There are descriptions of cultural and religious events, such as the Churung Mela festival, the Baramule worship, and Ekadasi Mela, a traditional festival during which people fast. Furthermore, the collection contains mythical stories, descriptions of the making of roti and other foods, as well as the building of houses, and descriptions of traditional Baram rituals from marriage to the cleansing of people who have passed away.

The collection deposited here is only part of the work carried out. A Baram dictionary has been archived with ELAR as well, and to revitalise the language, the team are developing a Baram orthography and preparing a Baram primer to facilitate its use in basic education and literacy programmes. The audio-video recordings of the Baram database will also be archived along with annotations in order for the data to be accessible to linguists, ethnographers and the Baram speech community.

In addition to the audio and video recordings, there is a collection of Annexes, including documents such as a grammar of Baram, a trilingual dictionary, text books for grades 1, 2 and 3, as well as papers on the noun and verb morphology of Baram. Furthermore, there are files containing a sketch of the ethnographic and sociolinguistic situation in the Baram community, a historical background and field reports.

To revitalize the language, the team are developing a Baram orthography and preparing a Baram primer to facilitate its use in basic education and literacy programmes. The audio-video recordings of the Baram database will also be archived along with annotations in order for the data to be accessible to linguists, ethnographers and the Baram speech community.