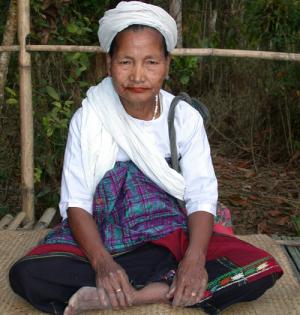 Landing page image for the collection “Singpho Language of North East India (including Turung)”. Click on image to access collection.

This collection presents a comprehensive documentation of both Turung and Singpho, two endangered languages of Northeast India.

This collection consists of audio recordings of speakers of Singpho, spoken in Arunachal Pradesh and Assam, India, and recording of speakers of Turung, a variety of Singpho spoken in the Golaghat, Karbi Anglong and Jorhat Districts of Assam. This fieldwork was conducted between 2001 and 2006.

The Turung themselves believe that they were originally a Tai speaking group. They have long been listed as Tai-Kadai speaking (Grierson 1904, Grimes 2000). According to their own histories, in the late 18th or early 19th centuries the Turung lived with the Singpho and adopted their language. At least a substratum of Tai influence remains in lexicon, phonology and syntax. Furthermore, a complex pattern of contact between Singpho and Tai languages was present for several centuries before the Turung adopted the Singpho language. There are therefore several strata of contact between the two language families.

The Singpho oral histories relate that they entered India from Burma in the last several hundred years. Fieldwork in 2004 established that there is a degree of mutual intelligibility between Singpho and Turung, although the Singphos use many lexical items unknown in Turung. Until recently, Singpho was the lingua franca in the Margherita subdivision of Upper Assam, and there are elderly people of many different communities who speak Singpho as a second language. In its role as lingua franca, Singpho has now been supplanted by Assamese.

Another group formerly called Doaniya, but now usually subsumed under Singpho, are speakers of Singpho. Some informants believe that Doaniya and Singpho were originally distinct varieties, though mutually intelligible. With modern communications this distinctiveness is being lost.
Turung and Singpho are clearly endangered languages. Turung is only spoken inside the seven Turung villages and the number of children learning and using the language is decreasing. Younger people’s speech has a high level of Assamese borrowing and young people often use only Assamese when talking to each other.

In both Turung and Singpho villages, men often marry Assamese speaking women, who after moving into the villages are not learning Turung and Singpho, and so Assamese is increasingly used in the houses. Turung and Singpho women who marry out are generally living in situations where their language is never used. Both among the Singphos and the Turungs, young people are leaving the villages to work in towns and there speak exclusively in Assamese or English.

Turung is a language of the Tibeto-Burman family spoken in seven villages in central Assam State, India by no more than 1000 people. Singpho (ISO639-3:sgp), a closely related Tibeto-Burman language, is spoken by around 2500 people in upper Assam and in Arunachal Pradesh State, Northeast India. There are perhaps about 25 Singpho villages.

The Singpho people talk about themselves as being divided in 4 hkawng /kʰɔŋ/ or areas, as followsː

In the first three cases, these names are derived from the names of the major rivers near to where the people now live. The fourth name, Turung, is more controversial. Some say that it derives the the Tarung river in Northern Burma, where the people lived at an earlier time; others say it is the name Tai Lung ‘great Tai’, because of the Tai ancestry of the Turung.

There are linguistic differences between the speech of each of the four Hkawng, and our deposit contains examples of materials collected in each of these areas. Most of the material, however, comes from the Numhpuk and the Turung.

Both languages are related to the Jinghpaw language spoken in Burma and China. Because Jinghpaw is from the same subgroup as Singpho, the increasing contact with Jinghpaw speakers is leading to a gradual convergence towards Jinghpaw. However, there are significant differences of phonology, syntax and lexicon between Jinghpaw and the languages in this project.

Even more endangered than the languages as a whole are some particular linguistic genres. For example, in March 2004 a comprehensive survey of the Turung villagers found only two elderly women who could recall traditional Turung songs and their traditional melodies. Most younger Turungs sing newly composed songs with Assamese or Hindi melodies.

Amongst the Singphos, there are said to be some elderly people in very remote villagers who are able perform traditional Singpho religious rituals.

In addition to its highly endangered status, Turung is also significant because it appears to be a mixed language in which several phases of contact with Tai languages can be discerned. Given the small number of Turung speakers and the increasing shift to Assamese, a documentation of their linguistic practice is urgent.

The language group in which both Turung and Singpho belong preserves some very conservative features of Tibeto-Burman languages, such as final stops (Matisoff 2003). In Turung, words are usually monosyllabic, polysyllabic or sesquisyllabic. Possibly due to Tai influence, sesquisyllables are eroding into monosyllables with complex initial clusters.

The collection comprises over 1200 audio files, as well as transcriptions and English translations of some of the recordings.

The recordings consists of traditional stories, some of stories of the Buddha and his previous lives; traditional songs, such as rice pounding songs and sagas; procedural texts, such as how to make certain types of rice cake or traditional customs relating to birth, marriage and death; cultural information, such as the preparation and usage of opium in former times; and a number of grammatical texts, elicitations and discussions about grammaticality.

Particular emphasis was given to recording texts from elderly informants identified as being particularly knowledgeable in a particular field.

Emphasis was given to collecting natural language usage, in the forms of narratives, songs, ritual texts and more texts, rather than using elicitation. Elicitation was used in the collection of a word list.

The transcribed Singpho and Turung texts can be searched at the Tai and Tibeto-Burman languages of Assam website, maintained by the Centre for Research in Computational Linguistics.

The video camera was used to record ritual events, with the approval of the consultants, as well as any texts where gesture or other visual cues were judged to be important. Many informants in Turung and Singpho villages prefered to be recorded on video, and where possible their wishes were met. For most texts, however, the minidisc recorder was preferred.

A Turung lexicon of around 1300 items was recorded in late 2003. This was supplemented by lexical items occurring in the various texts and by elicitation in identified semantic fields such as animal names and kinship terms.

This project also recorded a Singpho lexicon. This recording was done on minidisc. The lexicon was supplemented by specific elicitation of semantic fields that are culturally salient, as well as by listing the words that were found in the various texts, which formed a lexical database with the assistance of the Centre for Research in Computational Linguistics, Bangkok.

No serious linguistic work was done on Turung until I commenced my two-year post-doctoral fellowship at the Research Centre for Linguistic Typology in 2003.

The only major work on Singpho is Needham (1889), although more recently Dasgupta (1979) published a small pamphlet intended as a phrase book for Indian public servants working in the Singpho area. Neither of these works meets modern standards for linguistic analysis in terms of syntax or phonology and neither provides any texts.

There are no dictionaries of either language at present, although there is a short lexicon in Needham (1889).

Although the related language Jinghpaw has been described by Dai (1992) and aspects of Jinghpaw have been studied by many scholars (for example Matisoff 1974), there is as yet no comprehensive documentation with texts and recordings of the kind proposed for Singpho and Turung in this project. There are a small number of texts transcribed and translated in Dai (1992).

Both the Turung and Singpho communities are deeply interested in their own languages and supportive of my investigations up to this point. As neither language is currently actively written, one of the key issues under discussion with the community was the development of a practical orthography that would be used in my publication and in the development of pedagogical materials. A meeting of Turung villages was planned for February 2005 to discuss this issue.

The Turung and Singpho communities were consulted about which texts are eventually analysed and presented as part of this project. Turung speakers were particularly keen to ensure that the songs, stories, histories and other cultural texts known by a small number of elderly speakers are recorded and their texts made available both as sound and printed transcription and translation. Since some Turung people have access to computers, the electronic format will also be made available to them.

A high priority of this project was to document the linguistic aspects of socio-cultural practices. For an agriculturalist community like the Turung, rice planting, harvesting and threshing are very important. Marriage customs, customs relating to birth, death and illness, Buddhist festivals and other ritual and community events were also recorded as far as is appropriate, with the informed consent of the community. Matters relating to traditional daily life such as food preparation, and traditional beliefs relating to the construction of houses and the layout of kitchen gardens were also documented.

Copies of recordings will also be given to the communities in which they were recorded and a set deposited at the Department of Linguistics, Gauhati University.

The original minidiscs and video cassettes will be copied and one set of copies placed at the Research Centre for Linguistic Typology. The originals will be retained by me.

This recording was made by Dr. Stephen Morey in Assam. It is part of the heritage of the Singpho or Turung community.