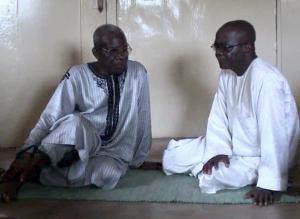 The collection contains a selection of about 80 Goemai texts. They are spoken by Louis Longpuan (speaker “A”), Andreas Shakum (speaker “N”) and Maria Miaphen (speaker “C”). The speakers live in the city of Jos (Plateau State), and they speak two distinct dialects of Goemai: Kwo (L. Longpuan, M. Miaphen) and Dorok (A. Shakum). The corpus focuses on illustrating each identified speech genre, and it contains information on different economic activities and cultural practices.

It is estimated that the Goemai community has 150,000 members, but the number of actual speakers is assumed to be less than a third of that. It is mainly spoken in the Great Muri Plains of Plateau State of Central Nigeria (a lowland region located between the Jos Plateau in the North and the river Benue in the South), but this collection documents three speakers living in the nearby city of Jos.

The Goemai community’s geographical neighbours include speakers of both Southern and Northern Angas-Goemai languages as well as speakers of non-related Benue-Congo languages (especially Tarok and Jukun). Speakers of these languages not only border the Goemai settlement area, but have also established numerous settlements within this area.

Goemai is a West Chadic language (Afroasiatic, West Chadic, Angas-Goemai group, Southern branch). It consists of four dialects: Duut, East Ankwe (or Derteng), Dorok and Kwo. These dialects are mutually intelligible, and their differences are largely restricted to the phonological and lexical level. The language is also known under the name of “Ankwe” in the older linguistic, anthropological and historical literature.

The existence of Goemai is threatened by the growth of the regional lingua franca Hausa (and, to a lesser extent, by the national language English). The transmission of Goemai to younger generations is limited, and Hausa is used by all Goemai as their means of everyday communication, and is also used in most spheres of activity. Many Goemai are literate in Hausa, and some also in English, but only very few are literate in Goemai. Those who are literate in Goemai are at least 60 years of age.

Parallel to the loss of the language, many aspects of the cultural knowledge encoded in the language are being lost. Members of the younger generation are not familiar with traditional folktales, riddles and songs; and many Goemai terms have been replaced by Hausa terms (e.g., terms for agricultural products, surrounding flora and fauna, religious concepts, kinship relations, etc.).

Older Goemai are conscious of the threat posed by Hausa, and are organising initiatives to preserve their language and promote literacy in Goemai, including formal language classes for children. Other efforts are co-ordinated by the Goemai Literacy and Bible Translation Committee, which has published a modified orthography together with some folktales, and which organises literacy classes on a regular basis.

It looks likely that Goemai will soon be replaced entirely by Hausa. However, it is currently still possible to aim at a comprehensive documentation because members of the older generation are fluent speakers of Goemai.

The collection contains an annotated corpus of approximately 80 texts. All recordings are transcribed, and most are translated into English and linguistically annotated. This information can be downloaded in the form of *.txt files (plain text created with Shoebox) and *.eaf files (an XML format created with ELAN). The transcripts are linked to the time line of the audio and/or video files. Metadata is attached.

The texts in this collection were collected in 2004 and 2005. Due to civil unrest in the Goemai-speaking area at that time, all data was recorded in the nearby city of Jos. It was thus not possible to witness the economic and cultural activities firsthand, or to record them in their natural settings. Instead, we staged some such activities in Jos, and the corpus focuses on giving descriptive and procedural accounts of them. This corpus complements Birgit Hellwig’s Goemai corpus housed at the Max Planck Institute for Psycholinguistics (Nijmegen), which covers around 200 natural and elicited recordings from 20 speakers from the village of Kwande (Kwo dialect), collected between 1998 and 2003.

This work builds on the researcher’s PhD project, during which the Goemai community expressed an interest in a more comprehensive documentation, including the collection and distribution of materials such as grammars, dictionaries and text collections.

The texts were part of a project to create of a comprehensive reference grammar, a Goemai-Hausa-English dictionary (together with Hausa-Goemai and English-Goemai wordlists) and an annotated corpus of natural texts.

The project collaborated with the language documentation programme of the Goemai Literacy and Bible Translation Committee. This committee was formed in 1998 at the request of the Goemai community, and it consists of representatives of the community. The results of the project are intended be of benefit to their documentation and literacy programme.

Users of any part of the collection should acknowledge Birgit Hellwig as the principal investigator, the data collector and the researcher. Users should also acknowledge the Endangered Languages Documentation Programme (ELDP) as the funder of the project. Individual speakers whose words and/or images are used should be acknowledged by respective name(s). Any other contributor who has collected, transcribed or translated the data or was involved in any other way should be acknowledged by name. All information on contributors is available in the metadata.